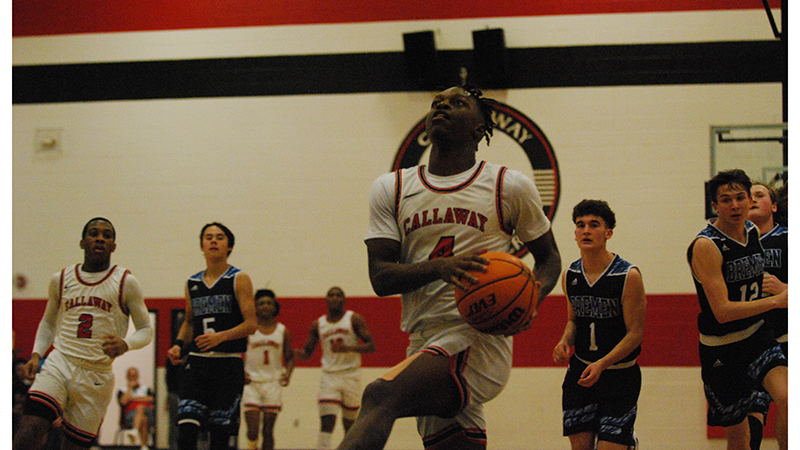 Callaway got off to a hot start when they forced turnovers on the Blue Devils first two possessions, which led to fast-break scores for the Cavaliers. Bremen was forced to use a timeout just a minute and 13 seconds into the game after Callaway started on a 6-0 run.

It did not get better for the Blue Devils out of the timeout as they turned the ball over on three straight possessions. This allowed the Cavaliers to build a 12-3 lead early in the game. Bremen answered with five straight points to get back into the game, but that was the closest the game would get after the very early stages of the first quarter. The Cavaliers rattled off nine straight points to put the Blue Devils in a chokehold.

“Honestly they shocked me, I didn’t expect us to come out playing like we did down three key pieces, but they answered the bell,” Head Coach Andre Johnson. “I told them defense is what is going to carry us from here on out.”

Callaway dominated the second quarter as they built a 42-24 lead at halftime and could all but taste the finals with 16 minutes left to go in the game.

Turnovers continued to plague the Blue Devils in the second half as the Cavaliers were quick to jump passing lanes all night. The Cavaliers interior players also gobbled up offensive rebounds and gave the team extra possessions.

The Blue Devils fought back in the third quarter. They were able to trim the lead all the way down to 11 before Denquavious Terrell scored four points in the span of 6 seconds to put the Cavaliers back up by 15. The Cavaliers were a bit lethargic to start the second half with too many sloppy turnovers.

“When we turn the ball over and push and do too much trying to be fancy instead of breaking it down and making simple passes and the simple read,” Johnson said.

The Cavaliers got back in the groove in the fourth quarter as they pounded the paint with bucket after bucket. Callaway quickly got its lead back up to 20+ points and never looked back.

DeShun Coleman and Terrell led the Cavaliers with 16 points but were joined by three others who scored double-digits as it was a team effort on both ends for the Cavaliers.