Troup, LaGrange, Callaway FFA come together for all day event on Wednesday 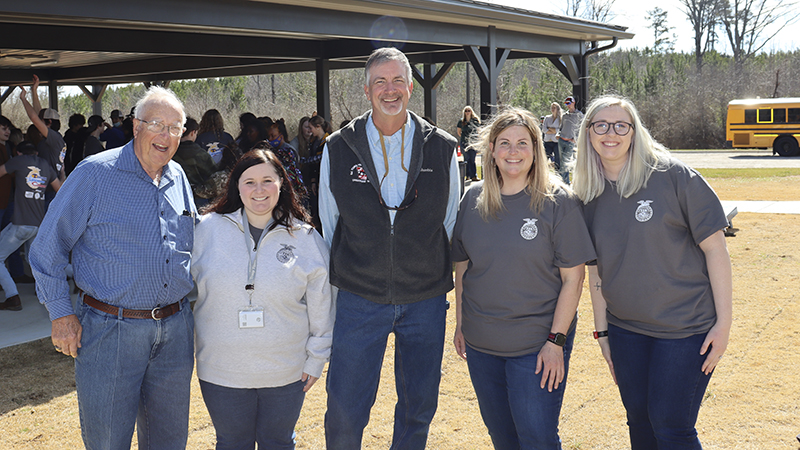 Students from Troup, LaGrange and Callaway High School filled the Troup County Agriculture Education Center on Wednesday as they participated in school-wide teamwork, leadership and community development. The event featured games, visits from different colleges, state officers and a lunch for the students of Future Farmers of America (FFA).

Savannah Ferrell, secretary of LaGrange High’s FFA, said the idea grew after originally being pitched as playing a game instead of a whole day.

“We mentioned doing some sort of event with the other schools. Originally, we had talked about doing a game of some sort [and] having everybody meet at one of the schools and just playing some games. It’s really grown a lot since what we originally talked about,” Farrell said.

Farrell said she was worried at first that COVID and other considerations might make it hard to pull off.

“When we first started talking about it, we weren’t really sure if we would be able to get the schools on board because of COVID and things like that. We were worried that people were going to say no, and that it wasn’t a good idea,” she said. “I’m really glad that we were able to find a way to do it.”

Jessica Bowden, LHS’ agriculture teacher, said she enjoyed seeing all the students from different schools come together for the event.

“It’s wonderful seeing all the kids from the different schools coming together and doing leadership activities and team building activities,” Bowden said. “This afternoon, I’m really excited because we’re going to do a community service project, and we’re all going to come together and write thank you notes to our sponsors, and just to people in general that always support our programs.”

Sam Washington, secretary for Callaway’s FFA, said this event gave him the chance to meet new people, which he didn’t have when he took his first agriculture class online.

“I was virtual at the time and I got the agricultural class. It was basic agriculture, I didn’t even know I had the class. I didn’t think I would like it, but turns out it’s really fun,” Washington said. “It’s been a really fun experience. I’ve met a lot of people, a lot of people that I really enjoy talking to and hanging out with, and then I just want to pass that on to other kids.”

Ashton Wheeless, Callaway’s FFA teacher, said she orchestrated a scavenger hunt for the event to help her students get to know people at other schools.

“My kids are very shy. They’re going to hang out with their friends. I Most of mine are introverts,” Wheeless said. “The scavenger hunt has things like find someone who’s a sophomore from LaGrange High School. It forces you to talk to someone. It’s got some deeper ones [too].”

Emma Walker, a student advisor for Troup’s FFA, said the event was a great opportunity for them to network.

“I personally think it’s a good way to get to know people in the community. We went to the Capitol last week and [Secretary Brad Raffensperger] told us, it’s all about getting to know people because you never know how those people are going to help you in your life. This is a way to connect with people and grow,” Walker said.

Shelby Waldroup, the FFA teacher for Troup High, said she is always proud of her students and she had a moment of pride watching Walker get interviewed.

“I’m always proud of them. When they were actually interviewing with [the newspaper], I could see Emma from when she was a freshman and how she’s become so mature throughout the years,” Waldroup said. “I had a little moment, especially since she’ll be graduating this year. It’s great to see them mature throughout high school.”

Troup County Commissioner Ellis Cadenhead stopped by to participate in some of the festivities. He said it was fantastic seeing the students enjoy the sunny day and learn through FFA.

“FFA means so much not just agriculture, it is a growth for young leaders to develop and take that into adulthood,” Cadenhead said. “It’s just fantastic being able to have beautiful day like today and do what they are doing.”

Ferrell said FFA has taught her that it is OK to ask questions about things that may confuse her with competition or class.

Washington said FFA gave him friends that he believes are his chosen family.

“FFA officers and their members, I have started hanging out with them a lot. I’ve gotten a job with them because one of my FFA friends introduced it to me, and I made a lot more friends that way,” Washington said. “Biggest thing we’ll learn with FFA is that friends are your chosen family.”