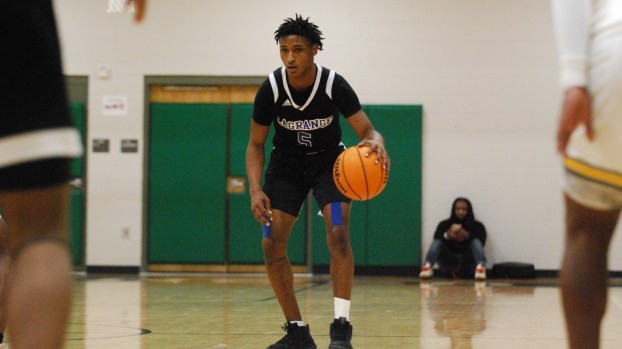 LaGrange High’s boys basketball team was dominated 73- 45 by rival Spencer in the Region 2-AAAA championship on Saturday. This was LaGrange’s third loss to the Greenwave this season as they could come up with zero solutions to the problems Spencer gave them.

Spencer started the game on a 4-0 run, but the game was tight early with Tristan Smith scoring the Grangers first three buckets of the game. Jakobe Jones went on a personal 4-0 run to tie the game for the Grangers but this was the last time the Grangers had a tie or lead in the game.

Devin Dowell hit a clutch three-pointer later in the quarter to cut the Greenwave lead down to three, but that was the last time the Grangers were competitive in the game.

Kaleb Salter was injured with 37 seconds left in the first quarter after a hard foul, but came back in during the second quarter after receiving medical attention.

The Grangers could only muster three points in the second quarter as their dreams of a region title slipped away.  LaGrange’s defense kept them in it for a large portion of the second quarter, but it was not enough to keep them in the game as the offense stalled possession after possession.

A Spencer 3-pointer right before the break stretched its lead up to 15 points at the half at took the wind out of the Grangers’ sails heading into halftime.

Another 8-0 run by Spencer to start the third quarter sent the home crowd into a frenzy as they realized they were on the cusp of a region title. Spencer shot the lights out of the building as a Super Bowl 47 incident happened where the lights cut off and caused a short delay in the game.

Momentum continued in Greenwave’s favor with Spencer doubling the Grangers score, 52-26 with 2:04 left in the third quarter.

It did not get better for the Grangers in the fourth quarter as the game was over long before the final buzzer filled the packed Spencer gymnasium.

The Grangers fell short of the region title, but still earned a no. 2 seed in the tournament, which will allow them to host a first round game against Westside High School (Macon) next week.