‘I like making boys cry’: Wrestling a family affair for the Garners 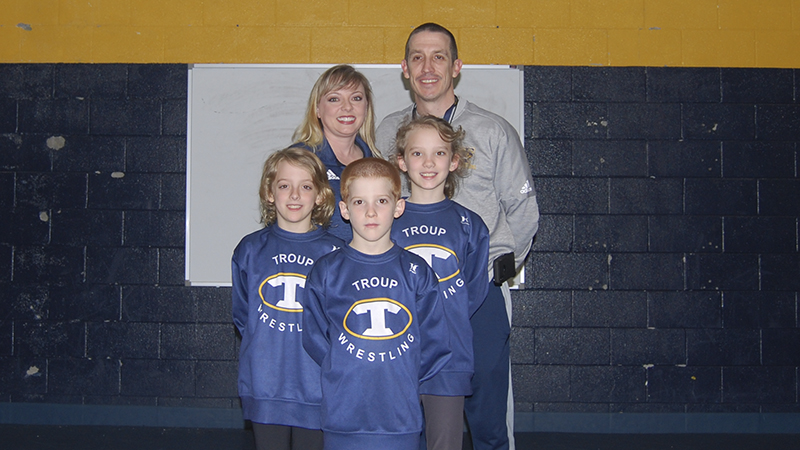 Wrestling runs in the Garner family. Drew Garner helped bring a state championship back to Troup County High School in 2001, but his days of rolling around on the mat have long been over. Now, he’s passing his knowledge onto his children, 8-year-old twin girls, Blakely and Brylie, and Gage, his six-year-old son. All three have taken the wrestling world by storm.

When asked what their favorite thing about wrestling is, Gage said that he likes learning techniques that many high schoolers don’t know.

Brylie was much less diplomatic. She said “I like making the boys cry” with her twin sister Blakely nodding along in approval.

“It’s only happened to one to two hundred boys,” Drew said with a laugh.

Drew is more than a father to his three children, he is also their wrestling coach. He seeks out the hardest opponents for his children with Blakely and Brylie often wrestling against boys.

Gage often finds himself training and matching up against Blakely. He loves beating his older sisters with Blakely clarifying that it only happens sometimes.

“Can we change the subject?” Blakely said.

“We try to keep them ahead of their age group and learn from the older kids, so they can dominate the kids their own age,” Drew said.

Their dad is a constant presence when they are on the mat.

“Sometimes we do get a little tired of dad coaching us,” Blakely said with Brylie agreeing with her sister.

The matriarch of the family, Melanie, did not grow up playing sports, but joined Drew on his wrestling journey long before they had kids.

“When we met, he was a wrestler at Pensacola Christian College and my dad would take me to see him wrestle in college because it was about four hours away,” she said. “It’s been a process, it’s been a learning curve for me, but I enjoy it, I really do.”

“With the girls I was hesitant at first, but Drew was very reassuring,” Melanie said. “Once I saw it for myself, I was OK. I was good with it.”

Despite this, she still gets nervous seeing them on the mat.

“This weekend at the tournament you will see her twiddling her fingers,” Drew said with a laugh.

Melanie has come to see the benefits of wrestling despite her initial hesitancy.

“I support them, they do great, they work hard, and it teaches them a lot of things on and off the mat,” she said.

For the family, wrestling is a massive part of their home life too.

“We have a wrestling mat at home so when we’re not here (Troup County High School) we’re practicing at home,” Drew said.

“Like on Monday, we didn’t have practice here because the high school season is over, we roll out the mat at home because it’s a little mat and practice,” Brylie said.

“Our home life and wrestling all blend together,” Melanie said laughing.

To take a break from wrestling, young Gage likes to play Minecraft. The girls on the other hand join their parents in the garden.

The sisters then teased their younger brother, who does not like to participate in the gardening and faked throwing up at the mention of eating vegetables.

“All he likes is chicken nuggets,” Blakely said with the whole family laughing along with her.

Wrestling has brought the Garner family even closer together. It gives the family something to bond over and enjoy together as a whole family. Drew’s proudest achievement for each of his three kids: “Being their dad.”