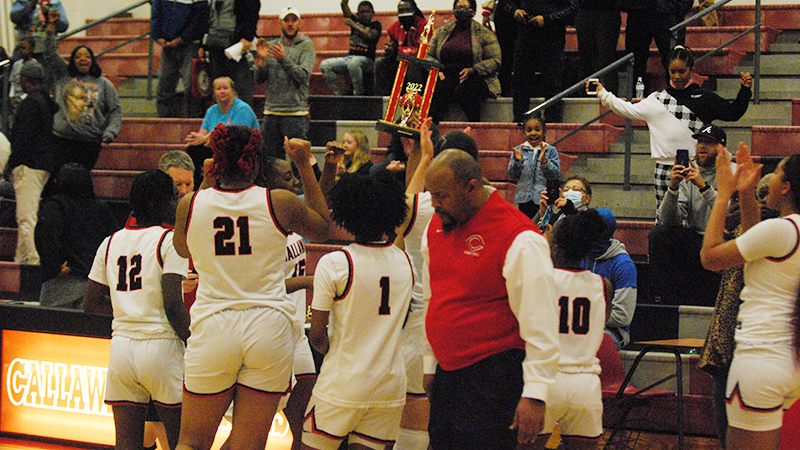 Four of the local high school basketball teams have made it to the high school version of the Big Dance: Both the Callaway basketball teams, the LaGrange boys team and the Troup County girls team all made the state tournament. The first round of the state tournament takes place Tuesday and Wednesday. Here is a look at the four local teams vying for a state championship:

Callaway won the Region 5-AA tournament for the second year running; this secured them a no. 1 seed in the state tournament. With this comes a chance to host the first round and a round of 16 game if the Cavaliers can make it that far.

Callaway lost in the round of 16 last season in a heartbreaker 57-56 to Columbia High School after dominating Union County in the first round. Columbia ended up losing in the state title game.

This is Head Coach Andre Johnson’s second year in charge of the Cavaliers, so he was not around to see Callaway High School make the quarterfinals in 2019.

Callaway’s first round opponent, Coosa High School, got bounced in the first round last season. While the teams did not match up against each other this season, Coosa lost to Temple twice while the Cavaliers swept them in the regular season.

The Cavaliers will host Coosa on Wednesday Feb. 23 at 7:30 p.m. A win would send them to the round of 16 which they would host on either Feb. 25 or 26. Their potential opponents in the round of 16 are Berrien and Northeast High School (Macon).

The Grangers will face Westside (Macon) on Wednesday Feb. 23 at 6:30 p.m. The Grangers are 11-1 at home this season with their only loss coming to the top team in the region, Spencer, by four points. On the other hand, Westside comes to LaGrange sporting a 5-7 road record on the season.

The Cavaliers come into this game riding a seven-game win streak coming into the game and have won their last six games at home.. With a win over Gordon Central, the Cavaliers will host Fitzgerald or Dodge County in the round of 16 on either Feb. 25 or 26.

Troup County pulled off an upset in the Region 2-AAAA semifinals but failed to win the region championship Saturday. The Tigers got off to a rough start this season, going 3-8 in their first 11 games. The team was able to turn it around and went 12-5 over their last 17 games of the season, including 8-2 on their last 10.

The Tigers have been one of the premier teams in AAAA basketball the last few seasons under Head Coach Carla Thornton. During the 2019-2020 season, the Tigers finished as state runners up and made the semifinals last season as well, only losing by four points to Cairo for a chance to go to the state final two years in a row. Troup County lost in the first round of the four previous state tournaments before their two deep runs over the last two seasons.

The Tigers enter the playoffs with a 7-3 home record and their opponent Spalding High School comes to Troup County with a road record of 1-7. The teams did not match up this season, but both lost their only game to common opponent Griffin High School.

The Tigers are entering the state tournament as a no. 2 seed for the fourth straight season. The Tigers will host their first round matchup against Spalding on Tuesday Feb. 22 at 6 p.m. A win for the Tigers means they will travel to Jefferson High School or host Benjamin E. Mays High School on Feb. 25 or 26, pending the outcome of that game.