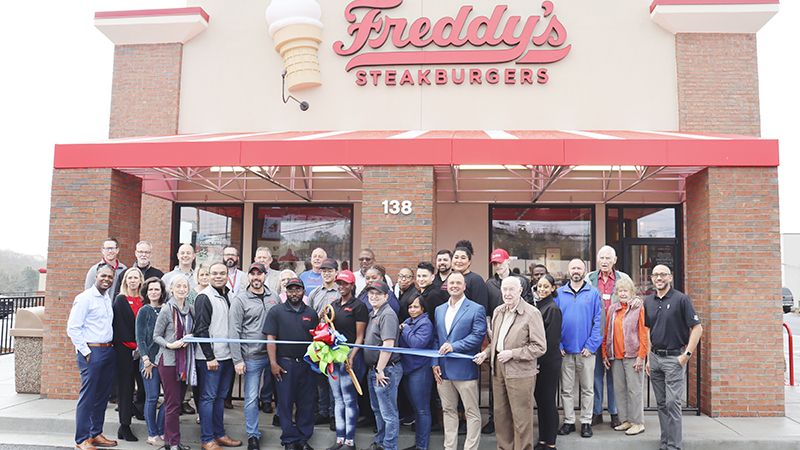 This past weekend Freddy’s Frozen Custard & Steakburgers opened to the LaGrange community and announced at its ribbon cutting on Tuesday that 10% of their proceeds from their first month will go to Court Appointed Special Advocates (CASA), a local nonprofit in LaGrange. CASA aids children currently in the foster care system who have experienced abuse or neglect. Various members of Freddy’s, the Chamber of Commerce and the community attended the official ribbon cutting.

Restaurant Operating Partner Rekeda Swanson said it was a surreal experience to cut the ribbon for the Commerce Avenue location.

Oren Molovinsky, chief operating officer for Freddy’s, said he was excited and that the company knew LaGrange was the right community for the restaurant.

“We were looking at different locations in LaGrange, so we knew LaGrange was a great market for us, and Freddy’s, and it’s the right type of community for us,” Molovinsky said.

Matt Moncus, executive director for CASA, said he hopes to see the community turn out for not only the custards, but the children of Troup County who will benefit from Freddy’s being in LaGrange.

“We want to see everybody come out and buy some custards because we’re honored that they chose us out of all the nonprofit’s in Troup County. They chose us to benefit from the 10% of the sales of those custards,” Moncus said. “During those first 30 days, we’d like anybody who knows of CASA or is willing to go learn [about] CASA to come out here and get a custard.”

Greg Woody was granted one of the first burgers from the new restaurant as his former business, Woody’s Service Center, was once where the restaurant now is.

Woody said it was an emotional, but exciting experience.

“It was awesome. I had the California burger, and it was very good. The custard was great,” Woody said. “It’s emotional, but I’m proud of them and again, I hope they have another 50 years plus the year like we were.”

Swanson said she wanted to highlight that their location should be seen as an opportunity for all the young adults and teens in the LaGrange and Troup County community.

“Being here in LaGrange also gives the kids the opportunity. Some of these kids need jobs before they go to school or whatever the case is. They can get that here. We’re very flexible,” Swanson said.

“We try to staff as many kids as possible so that when someone does have something going on, we do have someone to fill in. I want the kids mostly to know that this is a great opportunity for them to have as well.”