Tigers dominate Spalding to reach round of 16 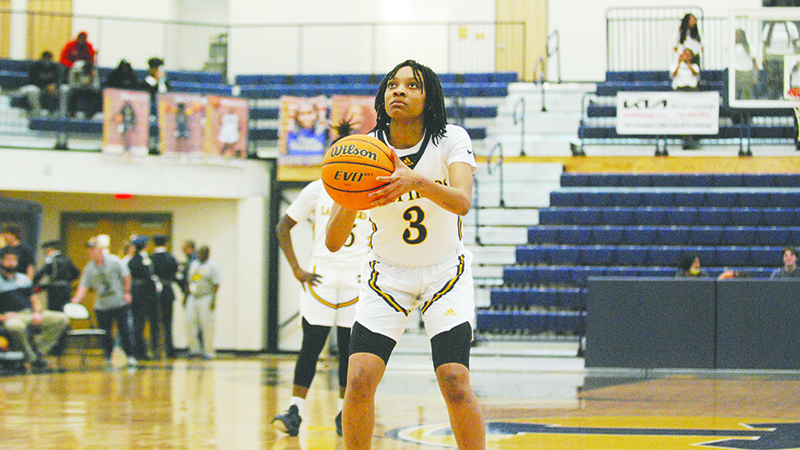 The Troup County Tigers girls basketball team dominated Spalding 69-47 Tuesday in the first round of the playoffs and are heading to the round of 16.

“I love how we played as a team,” Head Coach Carla Thornton said. “We played for each other.”

Alexcia Murphy started the scoring less than 10 seconds into the game with a tough bucket in the paint. It was a back-and-forth affair until the Tigers went on a 7-0 run to give themselves a 13-4 lead. The Jaguars battled back with a 6-0 run to get the lead back to one score, but that was the last time the game would be that close. Murphy scored another tough bucket in the paint to stop the bleeding and regain some momentum for the Tigers. Monyia Murphy produced a silky smooth move to get in the lane and hit a floater to give the Tigers a seven-point lead heading into the second quarter.

The Tigers went on to establish a 20-point lead with 3:30 left to go in the second quarter. The huge first-half lead led to Thornton deploying her reserves and getting her starters some much-needed rest.

Angie Dowdell came off the bench and had a huge block with less than 30 seconds left in the first half to get the Tigers bench on their feet.

The Jaguars started the second half on a quick 4-1 run, but it was too little too late to make an impact in the game. The Tigers were able to obtain a 30-point lead late in the third quarter as they were able to get into the paint whenever they wanted.

Coach Thornton had to call her team over late in the third quarter as things began to get chippy and calm them down. A technical foul was assessed to the Tigers after a hard foul left a Jaguar player down on the court injured.

“I told [the team] to play smart,” Thornton said. “I told them we don’t have to do that, protect yourselves, and finish the game strong.”

The Jaguars actually outscored the Tigers in the fourth quarter, but it only got them a slightly more flattering scoreline.

“I don’t think we finished strong, we kind of relaxed when we got up,” Thornton said. “A win is a win, so I’ll take it.”

Murphy was the star for the Tigers with 28 points. She bullied the Jaguars defense down low in the first half. She continued her hot scoring into the second half as the Jaguars resorted to the hack-a-Shaq strategy to try and keep her from dominating the defense in the post— she attempted 11 free throws, all in the second half. It had a minimal effect on her scoring, but she did appear to be visibly tired in the third quarter as she kept leaving her free throws short.

The atmosphere was sucked out of the gymnasium late in the game when a member of the Jaguars collapsed on the court heading back to the bench. Troup County athletic trainer Marty McCann rushed to her side and helped her sit up after a few minutes. The Tigers athletic director Andrew Calhoun carried her to the locker room with both sets of coaches clearly upset.