Cavalier Girls Dominate in First Round of AA Playoffs 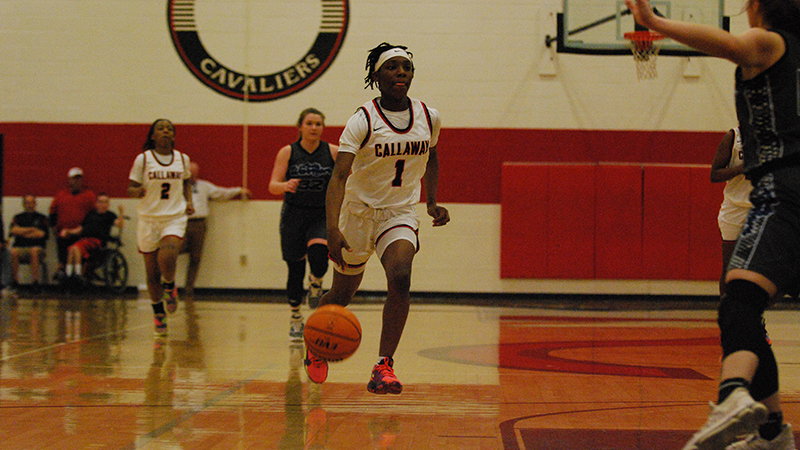 The Callaway girls dominated Gordon Central 66-35 Wednesday in the first round of the AA playoffs. The scoreboard didn’t tell the whole story, as the Cavaliers let their foot off the gas in the second half. Callaway led wire-to-wire without ever having to break a sweat.

Lacy Thomas got off to a hot start with two baskets in the opening 24 seconds to give the Cavaliers a quick 4-point lead. That led to a 15-0 run to start the game for Callaway. The Warriors answered with a 5-0 run of their own before Keiyunna Maddox drilled a half-court shot as the first quarter buzzer sounded.

Callaway’s defensive intensity matched their offense as Deyano Martin’s ladies deployed a full-court press to start the game. The defense hounded the Warriors and forced them into early turnovers, including an eight second violation. The warriors struggled to break through and only scored 5 points in the first quarter.

The game saw the Cavaliers get a load of extra possessions as Thomas, Raniya Mahone and Camryn Stargell were too much for the Warriors to handle down low.

Brooke Wilson of the Warriors nailed back-to-back 3-pointers late in the second quarter to gain some momentum, but that momentum was quickly halted by a Thomas bank shot from the low post to regain a 20-point lead for the Cavaliers.

The Cavaliers outscored the Warriors in every quarter of the game.

Jailyn Baker ended the game as the Cavaliers leading scorer with 16 points— 9 of which came in the fourth quarter. Gabrielle Johnson and Thomas also scored in double figures as it was a team effort on both ends for the Cavaliers.

The Cavaliers have made it out of the first round for the second year in a row after making it all the way to the quarterfinals last season. Callaway’s next game figures to be much tougher as it hosts Dodge County on either Feb. 25 or 26.