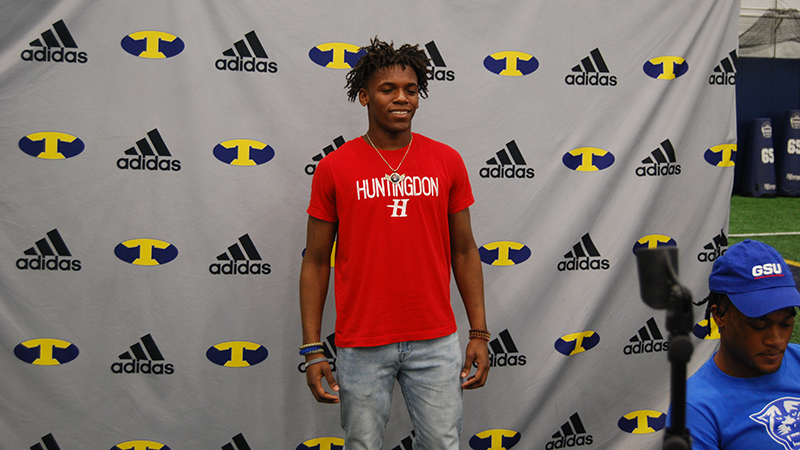 Coming off a great performance at the wrestling sectionals and state tournament, Kullum Irvin was named the LaGrange Daily News’ athlete of the week.

Irvin is a dual-sport athlete at Troup County High School and has been a football player almost all his life. Wrestling was not something he tried until his eighth grade year.

“Wrestling has overtaken football as my main sport mainly because of exposure and colleges were looking at me more for wrestling,” Irvin said.

Irvin’s time as a Troup County Tiger is coming to its inevitable conclusion, but his athletic journey is still in its formative stage; he will be taking his talents to Huntingdon College to play football and wrestle. Irvin is already looking forward to his time in Montgomery, Alabama.

Despite the fact that he has already started looking forward to his collegiate career, Irvin still loves being a part of the Troup Tiger family.

“It’s a family atmosphere,” he said. “It’s like no other, you have all types of people here. You have all colors and creeds and everybody loves the same and gets treated the same.”

Irvin has always looked up to his older brother, Michael Irvin, who wrestled on the Tigers team with him during Kullum’s first two seasons at Troup County High School.

“He’s had to overcome a lot of stuff,” Irvin said.

“We weren’t the richest family so he always had to make do with what he had. He pushed me every day at home to be the best I could be.”

His older brother is not the only one who has pushed Irvin to be the best version of himself. He also credits Troup County head wrestling coach Drew Garner.

“Off the mat, he has taught me how to be a better man,” Irvin said. “I’m not perfect, I’ve made mistakes before. He’s talked me through all that stuff. When I felt like there was nobody else for me to talk to, he was always there.”

“When Coach Garner took over the program my sophomore year, my ability in wrestling and my belief in myself skyrocketed and shot through the roof,” Irvin said.

Irvin knows that his athletic career will come to an end eventually but may have found a way to stick around wrestling much longer than he originally anticipated.

“Refereeing is actually something I really like,” he said with a laugh. “Going into it I didn’t think I would like it because I didn’t want to get yelled at by parents.”

Irvin was class president his sophomore and junior years but did not run this year to focus more on wrestling. Outside of athletics you can find Irvin playing Call of Duty.

“The week before state we sit down every day and clear our minds for about five or six minutes to prepare for our next opponent,” Irvin said. “We listen to ‘In The Air Tonight’ and it just gets us in that mode to go out there and win for your team.”