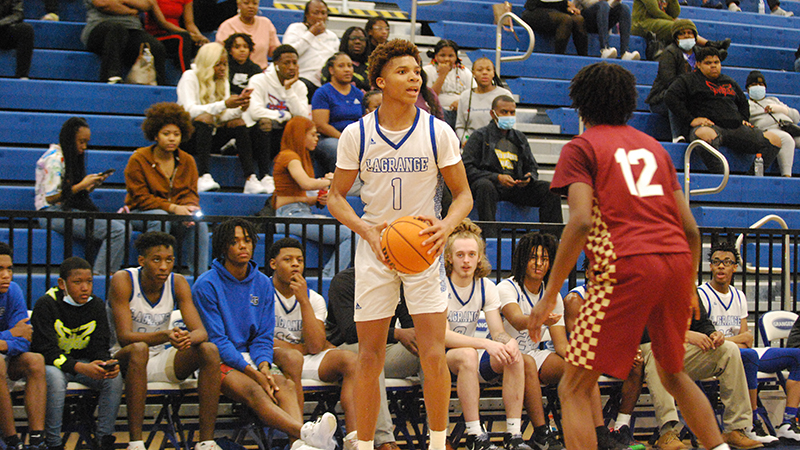 The LaGrange High School boys basketball team lost a heartbreaker 69-63 to Westside (Macon) on Wednesday and saw their season come to an end on their home court. This is the third straight year the Grangers have lost in the first round of the playoffs.

Both offenses struggled to get going in the first quarter with the Grangers leading 14-11 as the buzzer sounded. Westside took the lead on a big four-point play to start the second quarter. This was the first of six lead changes in the quarter. With the game tied at 25, Westside went on a quick 5-0 run before Jakobe Jones answered with a basket and foul followed by a Kaleb Salter hook shot to tie the game back up at 30.

Jones proceeded to hit two free throws with 16.2 seconds left to go in the half to give the Grangers the lead heading into the break.

Westside regained some momentum early in the third quarter until Tristan Smith had a huge block on an attempted 3-pointer to get the crowd back in the game.

After Westside tied the game at 36 with 4:04 left in the third quarter, Jaquarious Hurston and Jones nailed 3-pointers on back-to-back possessions to give the Grangers the lead.

Westside took a three-point lead into the fourth quarter. Taylor Stephens hit a deep 3-pointer with 7:11 left in the fourth quarter to bring the Grangers within one score. Smith then tied the game at 49 the very next possession, but Westside regained the lead shortly after. Smith had a massive dunk with 3:55 left to play in the game to cut the lead to two and get the quiet crowd some energy to feed off of. Jones got a huge steal and layup to tie the game at 57-57 with 3:12 to play. Westside followed with a 3-0 run and the Grangers were never able to battle back.

Shannon Fountain buried a 3-pointer with 1:21 to play to give the Seminoles a 6-point lead that ended up being the dagger.

The Grangers played the foul game down the stretch to try and get back in the game, but it was in vain as the Seminoles made free throw after free throw.

LaGrange had a player ejected late in the game as things got chippy with the game no longer in the balance.

In his last basketball game as a Granger, Jones carried the load on offense. He scored a team high 29 points in the losing effort. He also went an impressive 10 for 10 from the free throw line.