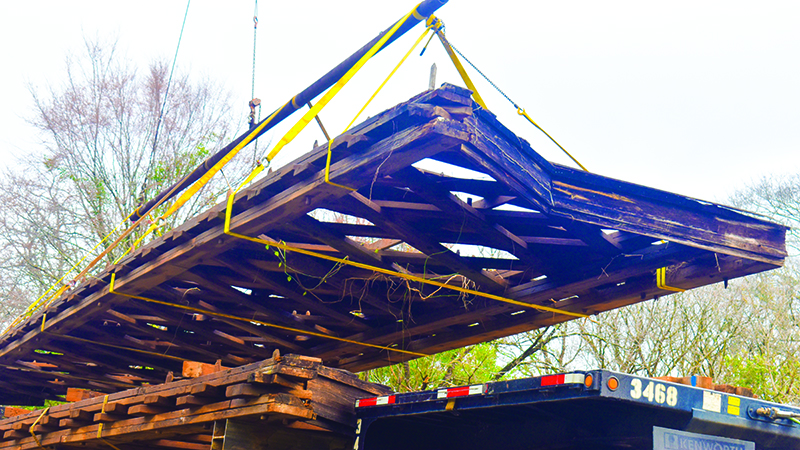 EDITOR’S NOTE: This story has been updated to correct information concerning the bridge’s history.

The 17 by 60-foot bridge was transferred in parts from Callaway Gardens to an undisclosed location in Troup County Tuesday morning. Plans are in place to reconstruct, rehabilitate and rehome the bridge in an area of Troup County where the public can admire and learn about King and his bridges, explained Kathy Tilley, president/CEO of Visit LaGrange. 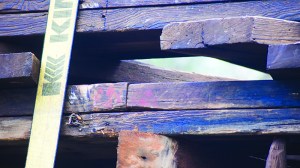 Red markings along the Horace King bridge note ‘G1, G2 and G3’, a common formula for architects in bridge building. The markings, which are in red paint, were more than likely made by King or one of his sons as they worked on the bridge.

The bridge is believed to be a replica of one King built that was destroyed in a flood at Harmony Church Road and Wehadkee Creek. George built a new bridge with a similar design that was set up in Troup County.

In 1964, Callaway Gardens asked the county if they could have the bridge. The county said yes, Tilley said, but with the stipulations that the bridge be available for public view and that a marker be erected saying the bridge had been in Troup County.

“They had every intention of moving it back out to another area of the gardens,” Tilley said. “[In 2020,] Callaway Gardens graciously gave it back to us and the Callaway Foundation gave us a grant to [reconstruct] the bridge.”

Tilley said that the bridge has minor wood rot but is otherwise in excellent condition for being 150 years old. On closer examination, there are red markings along the bridge noting ‘G1, G2 and G3’, common denotations used in architect language. Tilley said it was extremely likely that the markings were made by King or his sons.

Assistant City Manager Bill Bulloch is serving as the project manager on the Horace King Bridge move and restoration project. He said the project has already been in work for over a year. The city, he said, is working with Opelika-based company, Scott Bridge Company, to assist with the project.

The bridge will be available for public viewing upon its renovation, Tilley said, and will be under 24/7 video surveillance to prevent possible vandalism.

The renovation is expected to be complete later this year.

Among King’s architectural accomplishments, he was able to build a successful business and serve two terms in the Alabama State Legislature. He also partially built Lafayette Square in downtown LaGrange. Upon his death in 1885, his funeral procession went around the square. His burial place is in the Mulberry Street Cemetery in LaGrange.

The Red Oak Creek Covered Bridge in Meriwether County is another known King Bridge still in existence. One of the most well-known bridges of his in Troup County was the Glass’ Bridge between LaGrange and West Point. Named for the Glass family, the bridge was deliberately burned down in 1954 due to instability.

With such few testaments to King’s life still present, Tilley noted it is more important than ever to preserve such parts of his, and any of Troup County’s, history.

“Any time that the city can keep, revive and bring back a piece of history, we need to do it,” Tilley said. “People will come to see this bridge.”