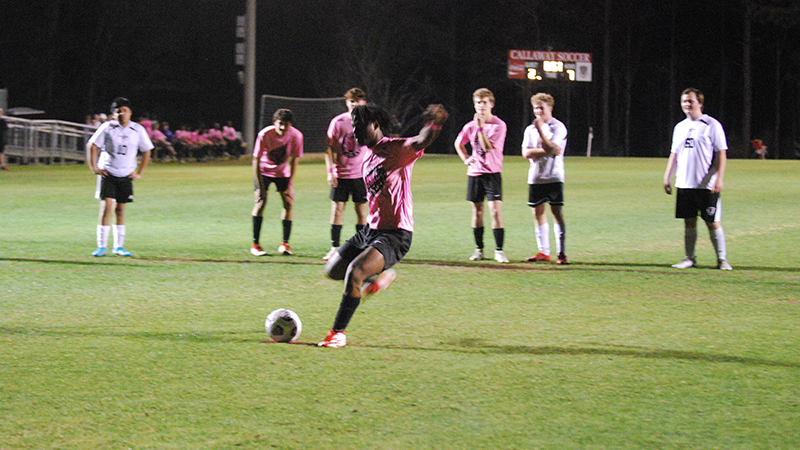 The Callaway boys soccer team mercy ruled Bowdon 12-2 on Thursday night. Callaway moved to 7-0-2 on the season and they now have won more games than all of last season. It was a short game for the Cavaliers as they reached the 10-goal mercy rule in the 68th minute of the game.

“We came out focused, and we controlled the ball and got a couple of quick goals,” Head Coach Mike Petite said.

Jostin Raymundo was the star for the Cavaliers with a first half hat trick, including one goal from the penalty spot. He also chipped in with two assists as well.

Greyson Batchelor and Connor Davis each had two goals apiece. Jurnee Jordan, Brett Belton, Eli Jones, Angel Velasquez and Nitler Recinos all got on the score sheet with a goal. Recinos is the starting goalie but got to play outside of the box as the score line got away from Bowdon.

Jones had an assist as well with Nelson Herrera chipping in with two.

The Cavaliers conceded two goals in the game, both coming on platoon swaps as Head Coach Mike Petite got everyone some time.

The Bowdon goalie was out of control all game and could have been sent — he conceded two penalties, but only received one yellow. The Cavaliers scored as a result of the first penalty but were not able to finish the second.

Despite the score line favoring the Cavaliers, it was not all sunshine and roses.

“Our team defending as to be better,” Petite said. “We let up two goals because we made some mistakes not just at the back, but we made mistakes going forward. Our defense starts with our forwards.”

The Cavaliers left the field with a win for the Callaway faithful but were playing for something much bigger than that tonight.

“This is our seventh annual cancer awareness game,” Petite said. “The guys all had pink tape on their wrists with somebody’s name in there. Me personally had both my wife and mother-in-law at the same time touched by this, so there’s obviously a personal connection for me and all the boys.”

Both Callaway teams sported pink jerseys that they will be able to keep forever.

The Cavaliers kick of region play on Tuesday March 1 against Bremen.