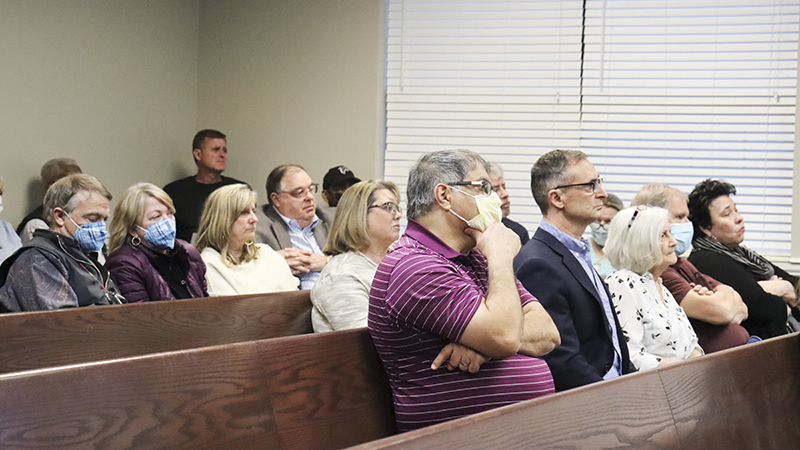 In a split decision, the LaGrange City Council voted to approve the rezoning of property located on the 1400 block of Vernon Street, essentially giving the green light to a 320-unit apartment complex that plans to build there.

Councilmembers W.T. Edmondson and Nathan Gaskin, voted in favor of the rezoning while Councilmembers Tom Gore and Mark Mitchell voted against it. Councilmember Member Jim Arrington abstained from voting, so Mayor Jim Thornton broke the tie by voting in favor.

A dividing factor for residents was the concern that the proposed apartment complex would bring in an influx of traffic to the surrounding area.

Thornton said he understands the concern regarding the new apartment complex, but he feels that denying it will lead to less development in that part of town.

“If the 300 apartments are the problem for the traffic, you can’t put them anywhere on the west side of town because if you put them on West Point Road or if you put them on Roanoke Road, those people are going to still have to drive down Vernon,” Thornton said.

Thornton said he understands the frustration from people concerned about the traffic on Vernon Road.

“We know Vernon is a problem [and] it is a traffic issue. It’s not our worst. If you look at the traffic counts in town, it’s not the highest,” he said. “The problem with Vernon is that it goes from three lanes in the city, then it drops to two lanes and then it goes back to four lanes right where this development is proposed.”

City Planner Mark Kostial said he aided the council by interpreting the Unified Development Ordinance (UDO) for this rezoning. He said he wanted to ensure all requests were consistent with the expectations defined in the updated document.

“As the City Planner my role is interpreting and administering our UDO after receiving a rezoning application [and] also ensuring that requests being made [are] consistent with expectations enumerated in our 2021 Comprehensive Plan update,” Kostial said. “The City of LaGrange is genuinely concerned about the safe and efficient flow of traffic throughout our community which is why Staff has and will continue to communicate with GDOT representatives as it relates to existing traffic challenges within the Vernon Street corridor and within many of our other major thoroughfares which are also State Routes.”

The UDO was updated in 2021 and has ten listed purposes for helping the city of LaGrange. Kostial said the city is concerned about traffic and will continue to update alongside the Georgia Department of Transportation.

David Sample, a concerned citizen, spoke at the first public hearing about the rezoning. In an interview after the meeting, he cited traffic as the main one.

“We have 320 units going on a 22-acre site. That’s just one of the issues and that’s the one that we targeted the most because of the concerns of increasing traffic on a road that’s already overburdened,” Sample said.

Lt. Marshall McCoy with the LaGrange Police Department said he encourages members of the community and council to reach out to LPD with their concerns.

“If they have any frustration, they can reach out to me. We have traffic counters. We do send officers out. We address traffic issues all time,” McCoy said. “In turn, we make a recommendation to our elected officials and to the mayor and they’ve always worked with us on that. Anything they’re seeing, they can always reach out to us as well.”

Kostial said the decision to rezone the property was based on a traffic impact study completed in April of 2021.

He said the study highlighted the challenges associated with traffic, which was brought before the council by community members.

“Based on information contained within a recently completed traffic impact study dated April 29, 2021, Vernon Street has a 24-hour volume count ranging from 15,905 to 16,750,” Kostial said. “Citizens who travel this roadway with any regularity and those who reside along this corridor have firsthand knowledge of challenges associated with vehicular traffic congestion which they expressed to our elected officials.”