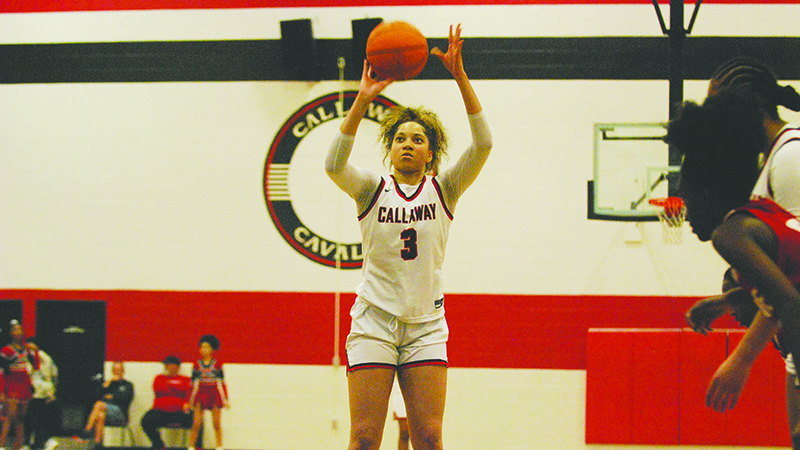 The Callaway girls dug deep and pulled off a miraculous comeback to advance to the AA state quarterfinals for their second straight season under Deyano Martin Friday night. The Cavaliers overcame a 12 point deficit at the end of the third quarter to beat Dodge County 42-41.

It was a dramatic come-from-behind win that will surely live on in Cavalier basketball history.

“It was a gutsy performance, the girls never quit,” Martin said. “I’m just real happy for the girls, but we have more work to do.”

Dodge County started the game on an 11-0 run as the Cavaliers went scoreless for the first 5:46 of the game. Callaway could only muster four points in the first quarter and trailed by double-digits in every quarter but the most important one.

Gabrielle Johnson hit a 3-pointer to open the second quarter for the Cavaliers and cut the lead back to single-digits. Dodge County answered with a three of their own as they outpaced the Cavaliers the entire first half. Dodge County even stretched the lead out to 15 points with 2:38 to go in the first half, Johnson stepped inside the 3-point line to drill a two late in the quarter to keep the lead manageable going into the break.

“To start the game. they hustled more than we did,” Martin said.

Once again, it was Johnson hitting a big shot as she nailed another 3-pointer to open the second half. Dodge City was able to regain a double-digit lead late in the quarter and took a 12 point lead into the decisive fourth quarter. The Cavaliers only scored 22 points in the first three quarters as the offense struggled to get anything going.

The Cavaliers kept chipping away at the lead in the fourth quarter. Lacy Thomas hit two free throws with 5:57 left in the game to cut the lead to six —the closest the game had been since the early stages of the first quarter. Niakoe Burks hit a layup on the next possession to trim the lead all the way down to four. Keyunna Maddox made a slick move to maneuver into the lane and lay the ball into the basket to cut the lead to two. At that point, the quiet crowd for Callaway erupted.

The Cavaliers were down three points when Gabrielle Johnson stood at the top of the key and unleashed a 3-pointer that hit nothing but net to tie the game with 3:07 to play. Maddox jumped a passing lane and broke away to get an easy layup to give the Cavaliers their first lead of the game on the ensuing possession. Dodge County promptly tied the game at 39 on their next possession. The Cavaliers missed a chance to take the lead as the air was sucked out of the building; fortunately Camryn Stargell came up with a monster block on the other end to keep the game tied before getting fouled and sinking a free throw to give the Cavaliers the lead with a little over a minute left in the game.

Dodge County took the lead back with under 30 seconds to go and quieted the home crowd. Then, Burks carved her way into the paint to hit a game winner with 12 seconds on the clock. Dodge County missed a shot at the buzzer as euphoria overtook the gymnasium as DMX’s Party Up (Up In Here) blasted through the stereo system.

Burks had one-point heading into the pivotal fourth quarter but showed up when it mattered most. The star of the show was Johnson as she canned five 3-pointers en route to her game-high 19 points. No other Cavalier scored in double figures. Every time the Cavaliers needed a response Johnson answered the bell.

“She’s been doing it all season and throughout her whole career,” Martin said. “She’s been that big shot maker, we have other players on the team that can make big shots, but in those big moments Gabby somehow hits big shots for the team.”

The Cavaliers will eagerly await the results of Saturday’s game between Elbert County and Swainsboro to find out who their quarterfinal opponent will be.