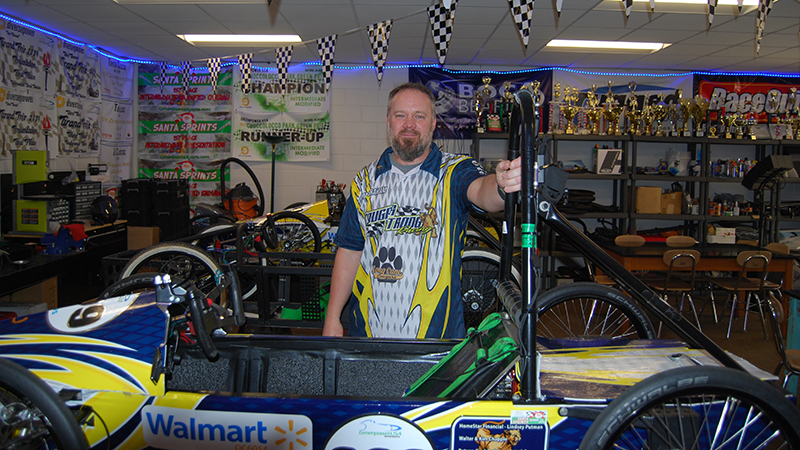 The Cougar Strong Race team is more than just middle schoolers driving around in cars, it’s a STEM program that allows kids to start taking theoretical knowledge and applying it to real life scenarios.

The Cougar Strong Race team was founded at Long Cane Middle School five years ago under the stewardship of Mathew Graham. Each grade level has their own separate team. Graham started at Long Cane as a science teacher, but his responsibilities have morphed over the years to the point that the Cougar Strong Race team is his sole responsibility at the school.

When he is not teaching the class and working with the students after school, he is spreading Greenpower racing to other schools in the county. In the last year, he has helped kickstart programs at Callaway High and Troup County High.

This team has brought people from all sorts of backgrounds into the program, and many do not participate in other sports. Sport is a bit of a loose term as the team encompasses a wide range of skill sets; some members of the team drive, others are a part of the pit crew, and others are on the marketing team — these individuals put together videos and marketing strategies.

“Some want to be mechanics, some want to be engineers, some like public speaking and marketing or they like working on a computer building websites,” Graham said. “It’s not just a racing program, it’s a true STEM program where we can dig into all these different areas.”

Graham says that he was shocked when about 40% of the people applying for positions were girls. Racing has typically been thought of as male-dominated industry, but Graham is happy to see his program bring all sorts of people out.

A lot of the students that join the program do not have experience or a background in automotive.

“Probably like 20% (have a background in automotive), ” Graham said. “A lot of them have never turned a wrench. They have no idea what a socket or a ratchet is.”

“We have an amazing tool collection and the kids get to learn about all these tools and how to use them,” he said. “Wal-mart Distribution Center was a big part of that.”

Graham has not built this program alone; he has had help from the local community and his fellow teacher and coach Chris McCalla. Diverse Power has given the team $10,000 a year for the last several years.

The program helps build futures for the students but also gives them a place in the here and now.

“There’s a lot of kids that don’t have a place, especially at the middle school level, so this gives them an opportunity to be a part of a team and find some belonging in that,” Graham said.

Despite the fact that Graham is the teacher and coach, during the races the students are encouraged to find solutions to the problems on their own.

“The best part is when they have problems; things they have to fix and figure out during a race,” Graham said.

“Two weeks ago, halfway through the race we heard a sound when they were going around the curves. Finally, the car fails and stops,” he said. “The goal is to get in as many laps as you can. They skipped their lunch break and got the car fixed for the next race and finished second place.”

The racing is only half of what the Cougar Strong Team is all about; the other half is the presentation aspect which varies at different races.

The team has been really successful too: The eighth grade team has won two national titles.