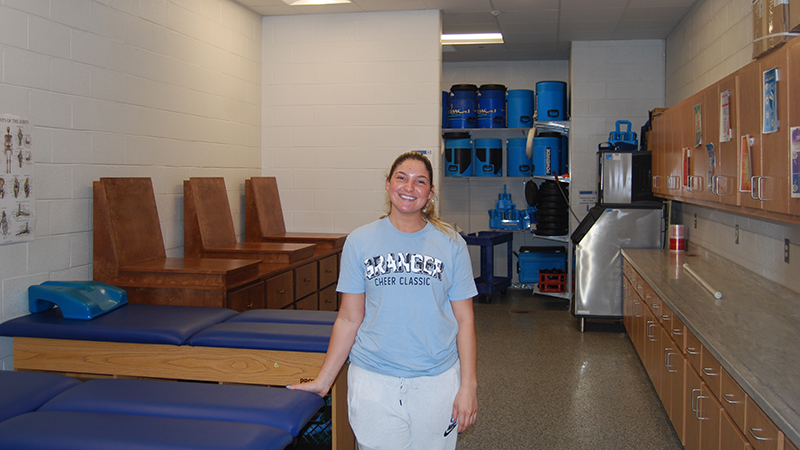 High school athletic trainers work tirelessly behind the scenes to keep the athletes healthy and fit. LaGrange High School’s athletic trainer, Beth Anania, is new to the area and new to her job — she started in January of this year.

Anania is a graduate assistant from Auburn where she is working on her master’s degree and hopes to land the full-time job.

“Everybody here is super nice, everybody made it a very homey and very welcoming environment to walk into,” she said.

Anania is the only athletic trainer on campus.

“I’m by myself, I’m driving the car. My hands are on the wheel,” she said. “I have to be innovative, I have to think on my feet. These kids’ health and well-being are in my hands.”

Anania hails from New Jersey and was in for a bit of culture shock when she saw LaGrange’s facilities and how Georgians approach sports.

“My high school was not like this,” she said. “Georgian sports in general are not like northern sports. Football here is insanely different than football in New Jersey.”

“Me being the only athletic trainer means I have to cover the soccer games at Callaway Stadium, which is a 10-minute drive, basketball here and tennis at the same time. There are so many facilities and sports teams I did get overwhelmed at first.”

The facilities were a major selling point for Anania, but there was another as well.

Athletic trainers do so much more than apply Band-Aids and Anania has risen to the challenge in her first semester at LaGrange.

“Athletic trainers are different than other healthcare professionals because we’re there before an injury, during the injury and after the injury,” Anania said. “That’s what people don’t understand. Yes, we tape ankles and ice bruises. We’re there for all the steps.

“I get to build a bond with the athlete which helps them trust me,” she said. “If I was some random person they hired for the game to tape and ice, the odds of the athletes coming to me with problems they have are slim to none,” she said. “An athlete can come to me with any physical and mental stuff, and I’d be there for them because they trust me.”

Anania has the wellbeing of a large number of athletes in her hands. She’s able to care for them based on a large trust network; the athletes trust her, the parents trust her and the coaches trust her.

She loves building relationships with her athletes, but the most satisfying part of the job for Anania is to build the athletes back up after an injury.

“If they’re coming back from an injury a lot of them are hesitant to get back, so it’s about checking off the boxes for them physically, but also their mental abilities,” Anania said. “If you hurt yourself badly, and you step out there on that field it is going to be in the back of your mind that you don’t want to hurt yourself again.”

The mental aspect of athletic trainers’ responsibilities are often forgotten about. In many ways, they have to act as a therapist for athletes returning from injuries. Anania finds it satisfying to rebuild an athlete’s psyche that has been shattered by an injury, to see them regain their confidence in their athletic abilities.

Anania deals with the athletes all day and handles them more than many of their coaches do. She believes it is a necessity that all schools have a full-time athletic trainer and not put the responsibilities on a coach.

“It’s good to have a separate person be an advocate for the athlete,” Anania said. “A student-athlete might be afraid to approach his coach because he feels like it might affect his game time or how the coach views the athlete.”

Anania has been an integral part of the winter athletic schedule and continues on into her first spring sports schedule at LaGrange High School. She works tirelessly but enjoys being a part of the Granger family.

“I’ve always loved helping people and being a good teammate,” she said. “Being an athletic trainer has grown me as a person.”

Cavaliers battle back from 12-point fourth quarter deficit to…