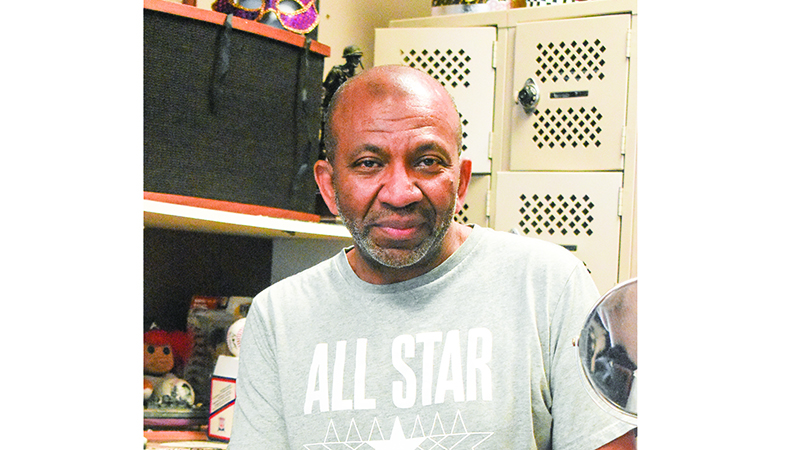 Editor’s Note: This is part of the LDN’s new series, Small Business Saturday.

R&B Consignment is far from your typical antique store and could hardly count as a consignment shop despite its name.

When customers step into R&B Consignment, they are instantly greeted with a blast of nostalgic music often played from a jukebox, right behind the counter. As they venture further, they’re met with unique oddities that can make one reminiscent of previous decades as rows of vinyl albums and covers of vintage magazine covers come into view. And then, more familiar objects, like superhero action figures or posters from recent theatrical releases.

There are more unique items too, as owner Ron Willis showcases in the front counter. Notable items include remains of a telegram, “the first computer,” Willis calls it; small cans of water that act as a nod to the emergency supply needs of the Cold War era; and preserved newspapers documenting events like Kennedy’s assignation to the day after 9/11. Items like his jukeboxes, slot machine and pinball machine or his 1950s telephone booth are big hits to first-time visitors.

“I want to get unique and different things, especially things from the 1960s, 70s and 80s,” Willis said. “That’s the generation I grew up in and that’s the majority of the [time period] people buy items like albums from.”

The shop first came into fruition when Willis retired from the military after nearly 30 years of service. During his deployments, he spent a lot of time visiting antique stores.

“I always kind of liked to look at unique stuff,” he said. “When I retired, I knew it was something I wanted to do. I moved a lot of the stuff I had in storage and at home here and went from there.”

With a new fascination of antiques under his belt, Willis, who originally lived in Columbus, moved to LaGrange and opened R&B. He instantly chose to give it a flair to help it stand out from neighboring antique stores.

Willis purposely chooses items he knows will appeal to the younger generations but also the older ones.

Usually, he said, when children see items in his storefront that appeals to them, toys mainly, they drag their parents into the store. Music items, particularly vintage records, are Willis’ favorite finds and his favorite item to introduce customers to. Many items, like antique cameras, may not work but are still popular among customers as display items, Willis said.

“I try to play everything before I sell it, and that’s how I find a lot of music I never knew about,” he said. “I’m sure a lot of young people haven’t heard a whole lot of [this] stuff. I ask them when they come in what they like so I can compare it [to what I have.]”

Willis travels near and far to find items of his liking, attending yard sales and estate sales whenever possible. Customers will bring him items as well. On occasion, he’ll even shop at similar stores like Born Again Antiques in Hogansville, which he sees more as networking than competition, Willis said.

After five years in business, Willis has his customer base down to a tee, he noted, able to accommodate items for the busy summer and holiday months. He’s also noticed aspects of his store that he may consider changing in order to appeal more to passersby.

“Something we’re looking at doing in the future is staying open a little bit later,” Willis said.

“Also, I think the word consignment [throws people off.] They think I have a lot of clothes, but I don’t. I think that’s why they’re not coming in, but once they do, they see I have very few [clothes] and what I do have is vintage. I’ve been thinking about taking consignment off [the storefront].”

However, Willis said he’s proud of his location and that he has a view of the changes happening in downtown.

“Downtown has changed a lot,” he noted. “A lot of people stay on Main Street because of the atmosphere with the clubs and restaurants, but Bull Street is starting to open up. We get a lot of traffic from Great Wolf Lodge and from the skate park. I grow off of them and grow off of their businesses down here.”