22 Questions in 2022: What’s the status of the Thread construction? 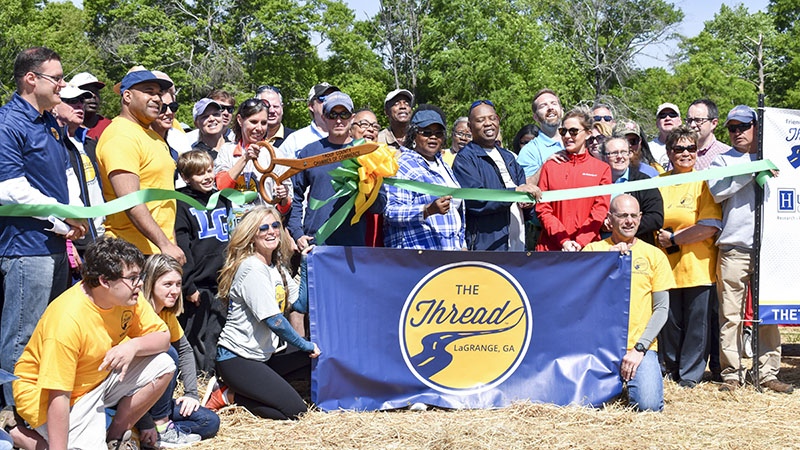 The second segment of The Thread had its official ribbon cutting Saturday. A cutest dog contest was also he;d along with a 5K.

If you have seen sidewalks being paved around LaGrange in the last few years, odds are you have seen the Thread Trail being installed. What initially began as a 29-mile plan has already expanded to a 31-mile plan and will likely expand even further.

“The original master plan was 29 miles, but we’ve already added one segment on the map that is going to be an extra mile loop and next to it is another mile loop,” project manager Natalie Hale said.

With the widening of Hamilton Rd., there have been talks of adding a multi-purpose path there and connecting it to the Thread, which would bring the project up to 34 miles.

The Thread started as a 10-year plan but with the constant expansions, there is no end date on the horizon.

Over the last five years – since the inception of the trail – 10 total miles have been paved with more quickly on the way.

Work is currently being done from Dallis Street as they try to connect a 5.2-mile loop around the Callaway Memorial Tower, which will give bikers a place to bike without having to be on the roads. Construction from this segment began in January.

Upcoming work will be around Mulberry St. Cemetery and George Harris Baseball Field. The other upcoming segment will extend the trail from Nutwood Winery across Davis Road and a one-mile loop around Ridley Lake.

Unfortunately, obstacles have presented themselves to Hale and the city as they try to connect the various parts of the trail.

“This loop has been held up by CSX (the railroad),” Hale said. “Unbeknownst to us, the city, half of Dunson Street is in the CSX right away. Instead of being the normal 50 feet, it’s 100 feet.”

The city is currently negotiating with the CSX to get access to pave the path down Dunson Street, but there is no immediate timetable for that portion.

When COVID-19 stuck in early 2020, construction had to temporarily halt, but progress got back going relatively quickly. Unfortunately, COVID-19 has meant that construction supplies have been limited at times ,which has slowed progression.

Progress has been made enough so that the Thread hosted its first event on Feb. 26. The event consisted of a 10k and 5k run; the 10k started on Country Club Rd. and the 5k started on Broad St. with both finishing in Granger Park. There was also a short fun run around Granger Park. Sponsored by Emory University, this event served as AJC Peachtree Road Race qualifiers.

To learn more about the Thread’s plans or to become a member by joining Friends of the Thread, visit thethreadtrail.org.

22 Questions in 2022: How will downtown housing impact…