Question 18: Is there a solution to Troup County’s litter problem? 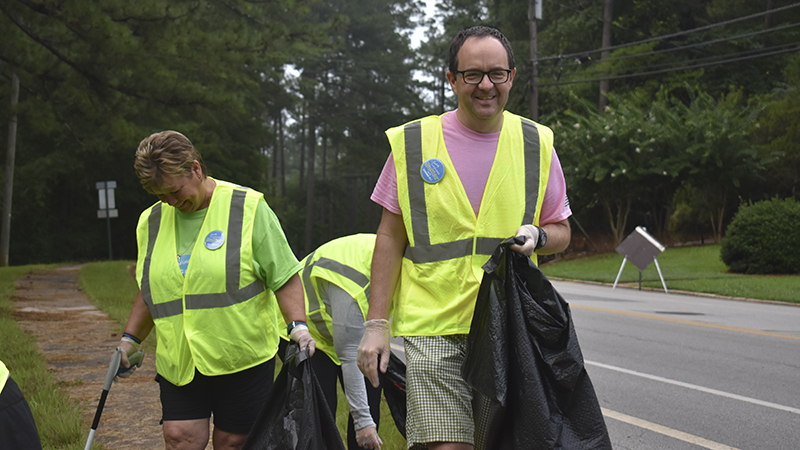 Litter along Troup County’s roads and neighborhoods continues to be an unpleasant sight. For years, cities and the county have attempted to find solutions to the issue, but even the best solutions have resulted in trash piling up again.

The city of LaGrange’s litter campaign, Leaving LaGrange Better Than We Found It, has had steady participation since its conception in 2018.

In March 2021, nearly 100 volunteers participated in the cleanup event at Calumet neighborhood.

Late last year, the city invested in new equipment to aid in the litter dilemma. The new machine is pulled behind a tractor and picked up as it drives over trash. Two city employees are close by picking up trash in areas the machine cannot reach.

Parks Director Michael Coniglio leads the city’s LLBTWFI litter cleanup campaign and noted that despite issues with scheduling this year’s campaign dates, this last bout had garnered great interest from the community.

“We are especially proud of the fact that for the past couple months, in freezing temperatures, we were able to have up to 50 people participate with us,” he said. “We have seen more than 100 people participate in the past, but it’s not easy getting up early on a Saturday morning and picking up trash in freezing temperatures. When the community works hard on a common goal, that’s when the good stuff happens. I’m looking forward to seeing what we can do in the next several years.”

Coniglio said a typically LLBTWFI event normally ends up being 75-100 trash bags and several, if not more, tires and various miscellaneous items.

According to the Director of Public Works Bo Prather, city crews will pick up trash in areas when staff sees a need. A normal day for a two-man crew yields between 20-40 trash bags depending on the area.

“A scheduled cleanup is a very tentative deal, we try to run by this, but often other areas can move up the list because of complaints and staff providing information,” Prather said.

However, the litter issue on the county level still remains an untamed conundrum.

For many years, trash was picked up primarily by inmates from the Troup County Correctional Institution, but this process was stopped in 2017 due to budget constraints as that facility closed.

Currently, the county has a contract with a company that picks up trash alongside their ground maintenance duties. Board Chairman Patrick Crews said the company picks up litter on approximately 522 miles, or one round, of county road.

In January, County Manager Eric Mosley said the county budgets for the company to complete four mowings in the county per year and pick up any litter on-site as part of the process.

County commissioners, while accepting the issue, noted the litter problem overall was a societal problem.

“I know how bad this trash problem is, but in my opinion, it’s our responsibility to pick it up, but it’s the citizens’ responsibility not to throw it out,” Commissioner Lewis Davis said. “We have a lot of citizens in the county, I hate to say, that just don’t care.”