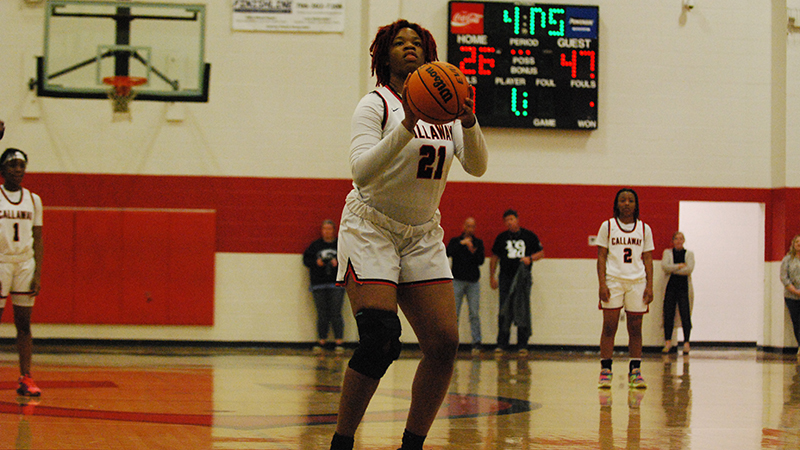 The Cavaliers girls basketball team saw its season come to an end in the AA quarterfinals for the second straight year Tuesday as they fell 73-43 to Elbert County.

Callaway was in the game in the first quarter, but it was a Blue Devil onslaught after that. The Cavaliers never led.

The Blue Devils scored the first three points of the second quarter before Mahone once again stopped the bleeding with an offensive rebound and put-back.

Gabrielle Johnson kept the Cavaliers in the game in the early stages of the second quarter with back-to-back buckets to keep Callaway down by only five. The Blue Devils followed with a 10-0 run that put Elbert County up by double-digits with 4:45 left in the first half. Aaniyah Allen made a shot in the paint at the buzzer to send the Blue Devils to the break up by 17. Terrace Hester was a menace for the Cavaliers in the first half as she scored 20 points on six made 3-pointers.

Mahone and Johnson scored 18 of the teams 23 points in the first half as the Cavaliers could not find balance on offense.

“They shot the ball really well,” Martin said. “When a team shoots the ball that well, it’s going to be tough to beat them.”

The Cavaliers headed into the fourth quarter down 59-27 with the game being all but put to bed. Alas, the fourth had to be played and the Cavaliers actually outscored the Blue Devils 16-14 in the quarter, but Elbert County deployed many of their reserve players.

Johnson scored 13 of the team’s 20 second half points in what proved to be her final game as a Cavalier basketball player. She totaled a team high 21 points on five made 3-pointers and carried the offensive load for Callaway. The next leading scorer on the team was Mahone with eight, but she did not score a point in the second half.

The season did not come to an end in the way the team envisioned, but it was still a good season for the Cavaliers as they won the region title and made the quarterfinals of the AA state tournament.

“I’m proud of the ladies, we are back-to-back region champs, back-to-back elite eight appearances,” Martin said. “Anytime you make it to this level, anytime you’re playing ball this late in the season, you have to be proud.”