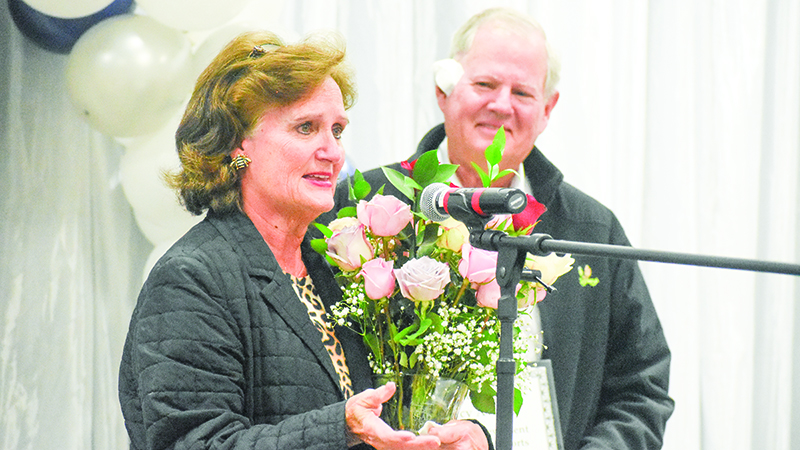 Debbie and Speer Burdette did not expect that they would be honored at the annual Certified Literacy Community Program [CLCP] Literary Bee Monday night, let alone that they would have a potential $125,000 fund established in their names.

Per tradition, the CLCP chose an honoree for its Citizens of the Year award, which went to the Burdettes for their continuous education and literary efforts in the community. In addition to the honor, the Burdettes were granted $75,000 in seed money from the Callaway Foundation coupled with a $25,000 matching opportunity from CLCP to create the Burdette Literacy Fund.

The fund, said Diane Harrell, Troup County CLCP’s interim executive director, will sustain CLCP’s efforts to advance adult and generational approaches to literacy and education engagements. Essentially, if CLCP is able to raise $25,000, the Callaway Foundation will match it with their own $25,000, Harrell said.

Debbie said she was speechless as she received an engraved flower vase with the news, but thanked the Callaway Foundation and the community for its support.

“This is such an honor for the community,” she said. “It’s been a calling for us to do this.”

Debbie is also known in the community as Mama Jama and previously served as the Troup County Certified Literacy Community Program director for 21 years. Her husband, Speer, served as the president of the Callaway Foundation for 16 years before retiring in 2018.

Diane Harrell, Troup County CLCP’s interim executive director, said that Debbie’s desire to serve the community had been unquenchable. However, due to her husband’s position with the Callaway Foundation, she was unable to request grants for CLCP.

“While both were education and literary-minded, it was a conflict for them to work together officially,” Harrell said.

When Debbie stepped down from her role as the CLCP director in May 2021, she wanted to do so quietly, Harrell recalled.

“She said, ‘don’t throw me a retirement party, don’t do anything,’” Harrell said.

Debbie was still in tears following the Bee’s ending, noting herself as indescribably thankful.

“There are no words to be honored like that,” she said. “We never did anything to be honored. We did it because we were called to do it, to help the community. It’s so wonderful.”