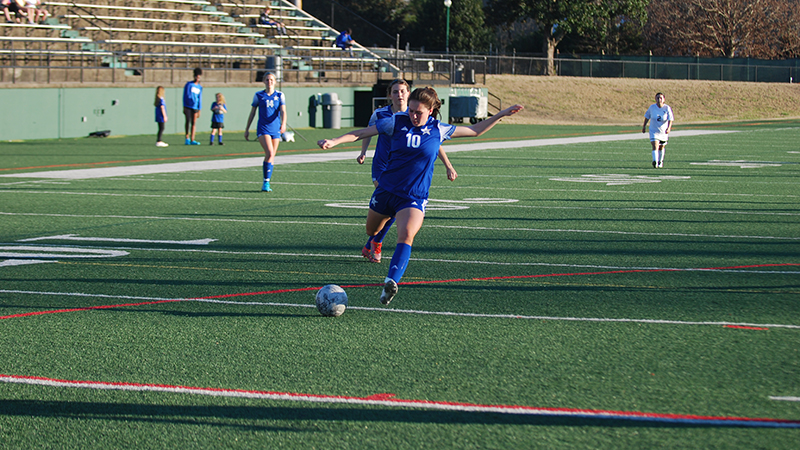 The LaGrange girls soccer team dominated Shaw 11-1 Wednesday enroute to a first half mercy rule victory. The Grangers have won all of the region games they have played by the mercy rule.

“We jumped on them early, which was nice,” head coach Jon Callahan said. “We gave one, which was disappointing, but we need to wake up sometimes and that was one of those moments.”

The Grangers started the game on the front foot and scored a goal in the opening five minutes when Karley Perry rifled a shot into the net. The defense had a breakdown at the back mere moments later as they allowed a Shaw runner behind the defense and she buried a one-on-one opportunity with the goalkeeper. It seemed like a tight game was in store with a 1-1 score, but the Grangers blew the doors off after that.

“We were a little lackadaisical, maybe thinking they weren’t going to have the amount of pace they had,” Callahan said. “That number 34 that scored is quick.”

LaGrange scored six goals in the opening 15 minutes to all but put the game to rest. Callahan made substitutes, which slowed the pace of play a bit, but piled on the pressure even with the reserves in.

“We didn’t get too direct, we passed and moved and took our chances,” Callahan said.

It was a team effort with 10 of the Grangers 11 having an assist.

“Sam Cottle was great, she usually is”, Callahan said. “Karley Perry was very good with her finishing. It was great to see them firing on all cylinders.”

Maddi Gay, Tatum Fritchley, Adry Matias and Gabi Martinez all got on the score sheet with a goal apiece.

“It was good to get some girls goals that haven’t gotten varsity goals yet,” Callahan said.

The Grangers are now 4-7 on the season overall and 3-0 in region play.

“We took on a difficult schedule this year, and that’s a little different than what we’ve done in the past,” Callahan said. “I wanted to see where we were. I didn’t just want us to feel good beating teams 10 to nothing; I wanted us to get beat sometimes so I can learn more about my team.”

The Grangers next game is away to crosstown rival Troup County on March 9.