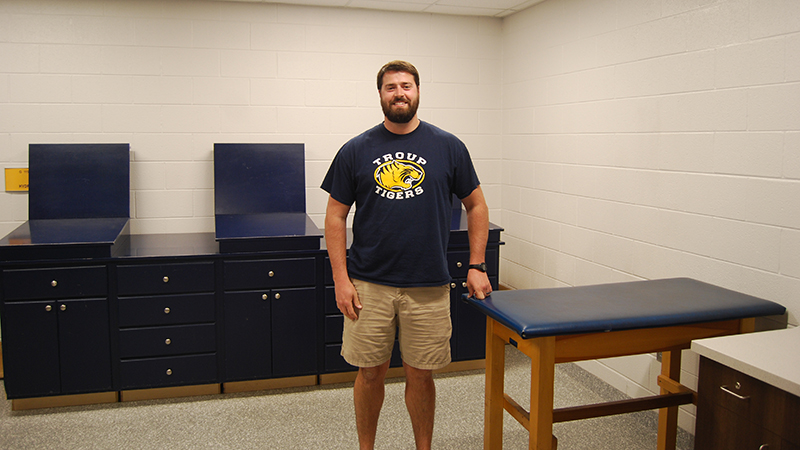 Marty McCann has been an athletic trainer for 11 years. He has bounced across America but has found a home at Troup County High School.

McCann did not start working with high school athletes straight out of college. He did some work for the Indianapolis Colts and originally came to Georgia to work at Fort Benning as a contract worker for the military.

McCann originates from Jacksonville, Florida where he excelled at sports in high school. He experienced devastating injuries in his high school career that limited his collegiate prospects and decided to pass on playing football in college.

“I went to college to play sports originally but didn’t end up playing football,” McCann said. “I got hooked up with the Colts and made it to the NFL in my own way rather than through athletics.”

During the interview process, McCann knew this would be a spot he enjoyed.

“I just liked the people I would be working with consistently as well as the few athletes I met. They were always respectful,” McCann said.

The people were a selling point for McCann but so was the prospect of being able to build his own athletic training program at Troup County High School.

“In the most recent history, they’ve never had a full-time athletic trainer,” he said. “I saw a chance to actually start my own program from the ground up.”

McCann has already started building his program after starting in January of this year.

“They had very little treatment modalities and rehab equipment,” he said. “I came with a lot of that stuff on my own that I’ve bought over the past 11 years of my athletic trainer career.”

“I came in with a lot of stuff to provide for them, and they’ve been awesome in listening and seeing what I think we need, and they’re providing resources to get that stuff,” McCann said.

“I really do think I bring a recovery component that not every school has,” he said. “I can do my rehab, pain control modalities, anything like that, mainly during the school day. I can leave after school for practices. Whereas if I wasn’t here during the school day to do that, we would be doing rehabs, treatment, taping from 3:30-3:45.”

McCann has found it extremely rewarding to build relationships with the young athletes and making them more aware of how to take care of their health and wellbeing.