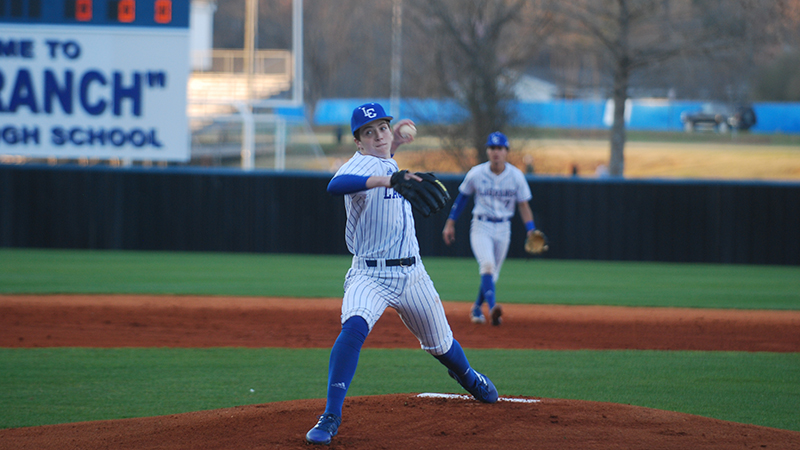 The Grangers baseball team pulled off a seventh inning rally to beat the reigning AAAAAA state champions Houston County 8-7 on Thursday. Houston County is the no. 2 ranked team in the state and this was its first loss of the season for them.

“That’s the defending 6A champs, ranked in the nation, and we did a lot of things wrong, but I was really proud of the way we kept fighting,” Head Coach Donnie Branch said. “We were playing a bunch of young kids and they battled.”

Cooper Stephens stepped to the plate with three runners on and no outs. He promptly hit an absolute missile to left field to drive home two runs and win the opening game of the LaGrange Toyota Invitational for the Grangers. The team stormed out of the dugout to meet him at second base and give him a celebration worthy of his heroics. On the way back to the dugout, the student section piled in to give young Stephens his roses.

“Cooper is a tough kid. He’s a freshman, but he doesn’t think like a freshman,” Branch said. “He’s not scared of any situation. I felt good with him up there.”

Trey Cook started on the mound and had a solid showing outside of the second inning where the team allowed four runs to cross home plate.

The Grangers’ offense was slow out of the gates and an error allowed a run to score for the Grangers in the bottom of the third. Colton “Spo” Esposito hit a laser to left field that went down as an RBI double as the Grangers cut the lead to two.

Gryson Cockrell hit an RBI single with two outs in the bottom of the fourth inning to cut the lead to one. The Grangers took a 5-4 lead in the inning on an error that allowed two Grangers to score.

Houston County tied the game on a wild pitch in the top of the fifth as the game turned into a back-and-forth affair. Cook was replaced on the mound after solid nights work with Robbie Parker coming into the game.

The rally caps were on in the bottom of the seventh as the Grangers got the bases loaded with no outs. Cook stepped up to the plate and turned a full count into a walk to drive in one run, cutting the lead before Stephens stepped to the plate and caused pandemonium.

“The one thing we did all game was compete,” Branch said. “I’m really proud we competed so hard.”

The Grangers are now 7-2 on the season and have to turn around and play another game on Friday against Madison Central at 5:30 p.m. In Branch’s eyes, there is a lot that needs to be cleaned up to get a win in that game.

“We were not very solid defensively,” Branch said. We need to clean that up. We kind of overcame our poor defense tonight.”

The LaGrange Toyota Invitational has been going on for more than 20 years. This is the type of event that puts LaGrange baseball and the city of LaGrange in the spotlight.

“It’s huge for our school, for our town,” Branch said. “We couldn’t do it without our boosters and our parents. It’s a big deal. We bring in some of the best people in the country here.”

The event hosts eight teams over a three-day span where games will be played at Granger Park and Point University.

LaGrange has another game in the tournament on Saturday morning at 10 a.m. at Granger Park and hopes it can reach the championship game that night at 7 p.m.