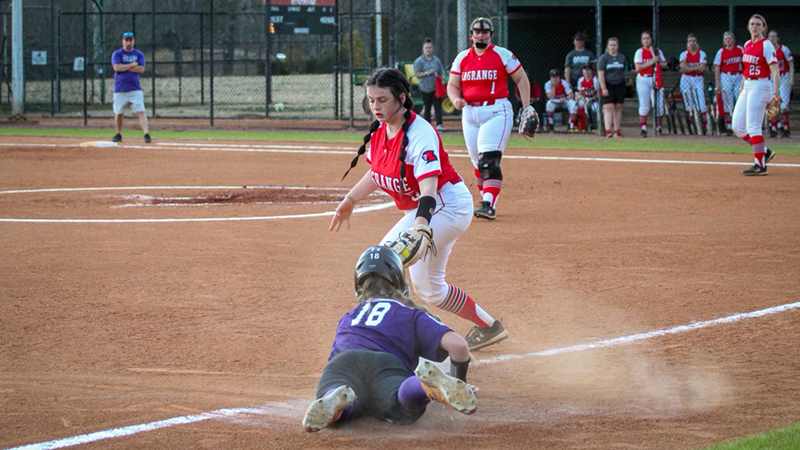 LaGrange made an amazing comeback to gain a split of a doubleheader with Agnes Scott on Wednesday night at the LC Softball Complex. The Panthers (1-6) overcame a nine-run deficit to win the second game 10-9 after the Scotties (3-9) took the first game 6-5.

The second game win not only was the Panthers’ first of the season but the first under new head coach Melanie Rushing.

Game 2
Agnes Scott scored eight runs in the first inning and another run in the second inning to build a 9-0 lead.

The Panthers exploded for eight runs in the second inning. They loaded the bases with one out. Pinch runner Sydney Rojo scored the first run as Karli Whitaker reached safely on the play.

Maggie White, Lindsey Green, and Kenzie Hornsby followed with RBI singles to make it 9-4. Kaitlin Redman greeted reliever Taylor Yates with a bases loaded double to right center, clearing the bases to cut the Scottie’s lead to 9-7. Redman later scored the eighth run of the inning as Abbey Gardner ground out.

Gardner (1-3) came on to pitch in the top of the third inning. She closed out the game with five scoreless innings of relief to earn the win. She gave up three hits, walked one, and struck out five.

The Panthers tied the game in the fourth inning. Redman doubled down the left field line with one out and moved over to third on a ground out. Landon DeLamar’s soft line drive to shortstop Colleen Thorson was dropped, allowing Redman to score the tying run.

DeLamar saved a run in the top of the fifth. The Scotties had runners on first and second with two outs. KayLeigh Fitzgerald sent a ground ball up the middle heading to center field. DeLamar made a diving stop behind the second base bag, flipping the ball to Hornsby for the force out to end the inning. Earlier in the game, Hornsby made a leaping catch to rob Gigi Hernandez of a hit.

The Panthers’ bench provided the go-ahead run in the fifth inning. Pinch hitter Parker Floyd doubled to the fence in left field to lead off the inning. Hailee Palmer, also pinch hitting, followed with a single up the middle to drive in Floyd to put LC up 10-9.

Gardner closed out the game by retiring the Scotties in order in the seventh inning. Redman snagged Emma Thomas’ line drive for the final out of the game.

The Panthers had 12 hits in the game. White finished the game 3-for-3 with a run scored and an RBI. Redman had the two doubles, scored two runs, and the three RBIs.

Game 1
Agnes Scott led 4-0 after two innings and held on for the 6-5 victory in the first game of the night. The Panthers cut the deficit in half to 4-2 in the third inning on run-scoring singles by Gardner and Lindsey Swearngin.

The Scotties added two runs in the top of the fifth to pad their lead to 6-2. The Panthers answered with two runs of their own in the bottom of the inning. White’s two-run double made it a 6-4 game. LC made it a one-run game in the sixth. Whitaker’s bases-loaded walk forced in a run to make it 6-5. Yates retired the Panthers in order in the seventh to pick up her second save of the season.

The Panthers had eight hits in the game, led by White’s two hits. Redman had a double and scored two runs.

The Panthers host the Mississippi University for Women on Sunday in a doubleheader starting at 12 p.m

Grangers stretch win streak to 8 with win over…