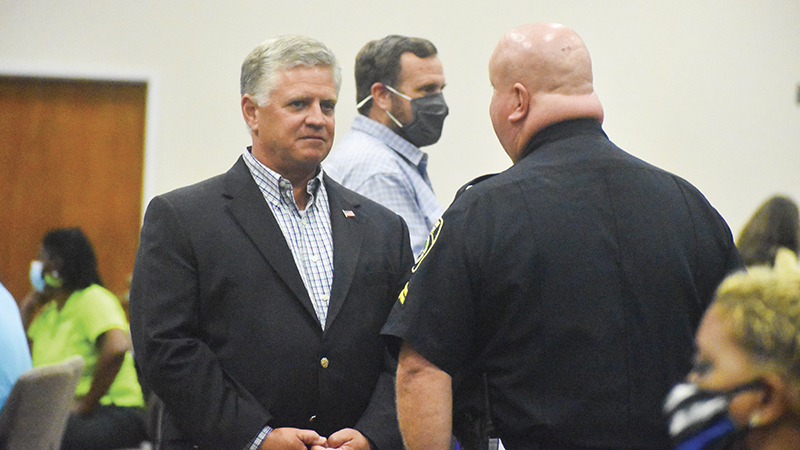 Ferguson spoke to reporters Wednesday morning to discuss his thoughts on Biden’s speech.

Biden spent the first few minutes of the State of the Union address speaking on the crisis in Ukraine.

“Six days ago, Russia’s Vladimir Putin sought to shake the foundations of the free world thinking he could make it bend to his menacing ways. But he badly miscalculated,” Biden said. “He thought he could roll into Ukraine and the world would roll over. Instead, he met a wall of strength he never imagined. He met the Ukrainian people.”

Biden said Tuesday that the Rubel, Russia’s currency, has lost 30% of its value and that the Russian stock market has lost 40% of its value. He also said he was closing off American air space to all Russian flights.

Ferguson was asked Wednesday whether the United States should be doing more to assist Ukraine in its war against Russia.

“I think we’re doing we’re doing an awful lot, and I do think the sanctions will have an impact down the road,” Ferguson said. “It makes no sense why we continue to buy Russian oil and allow Russian oil to be sold on the world market. Every gallon of Russian oil has a quart of Ukrainian blood in it, and I don’t think that we should continue to go down that road.”

In other topics discussed Tuesday, Ferguson also had an issue with the way Biden said it was time to secure the country’s border and fix the immigration system. He said the border issues are a direct reflection on the president.

“It’s something that we have been preaching about. The tragedy that’s happening in our southern border is a direct result of the bad administration’s failure to enforce existing law,” Ferguson said. “

We have seen drugs come across, we’ve seen human trafficking — people that are coming across the border illegally that the Biden administration has been putting on a bus or plane bringing to a community near you. That is unacceptable.”

“That’s why the American Rescue Plan provided $350 billion that cities, states, and counties can use to hire more police and invest in proven strategies like community violence interruption —trusted messengers breaking the cycle of violence and trauma and giving young people hope,” Biden said. “We should all agree: The answer is not to defund the police. The answer is to fund the police with the resources and training they need to protect our communities.”

Ferguson said it was “double speak” believing Biden has changed his stance on policing. Biden said throughout his presidential campaign that he did not support defunding the police.

“After a campaign of defunding the police, his position has certainly changed,” Ferguson said. “And now he wants to fund the police at the same time saying hold them accountable.”

There were very few masks seen in the House chambers during the speech, though some attendees did have a mask on. Biden was not wearing a mask.

“Because of the progress we’ve made, because of your resilience and the tools we have, tonight I can say we are moving forward safely, back to more normal routines,” Biden said. “We’ve reached a new moment in the fight against COVID-19, with severe cases down to a level not seen since last July.”

“I don’t think the American people are going to give him credit for something that’s already happened and that they’ve already acknowledged going forward,” he said. “Look at great states like Georgia. We’ve been operating very differently, and we’ve been successful at it in terms of the economy, in terms of our healthcare systems and our education systems.”