Ben Anderson: Once a star at LaGrange High School, now a star for the University of Georgia 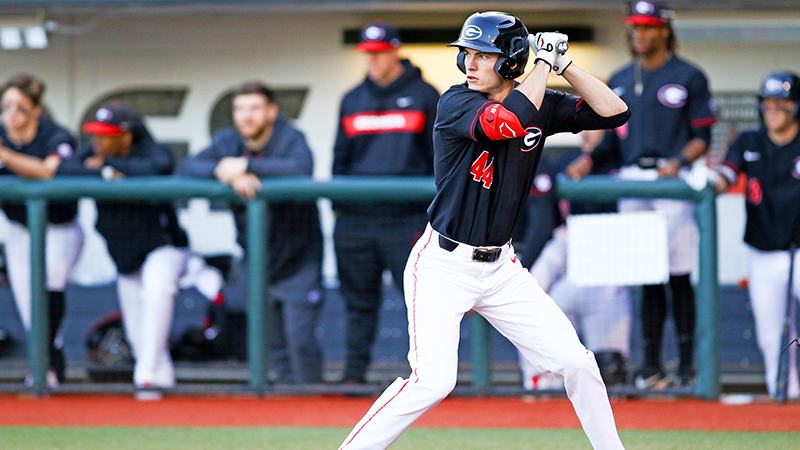 Georgia outfielder Ben Anderson (44) during a game against Richmond at Foley Field in Athens, Ga., on Friday, Feb. 14, 2020. (Photo by Tony Walsh)

Ben Anderson has been a star for the UGA baseball team so far this season, but before he embarked on his collegiate career, he was a star for LaGrange High School. He graduated from high school in 2017. He was a two-time all-region and Georgia High School Association (GHSA) all-state selection in his time as a Granger.

Anderson believes his time at LaGrange High School molded him into a player that a team like UGA would covet.

“My time at LaGrange taught me to work hard, to keep your head down and do what you have to do to prepare for baseball, for school, for life outside of those things,” Anderson said. “You have baseball, but then everything you do in baseball you can take and apply it to your life outside of baseball, and I think that was what LaGrange has taught me.”

Former LaGrange baseball head coach David Smart helped shape Anderson into a baseball player and a man worth being recruited by colleges.

Anderson was not recruited by the big schools his senior year, and took an offer to play baseball at Furman. He electrified Greenville, South Carolina as he batted .361 and had an on-base percentage of .461 en route to being named a Collegiate Baseball Freshman All-American. The big schools came calling after his monster freshman season, but he had eyes on going to one college and one college only.

“UGA was the number one team I wanted to play for, but there were other options,” Anderson said. “Growing up in LaGrange, it’s usually either Auburn, Georgia Tech, or Georgia. I watched a lot of Georgia sports growing up and once I visited the campus I loved it.”

It is early days for the 2022 season, but Anderson is putting together his best season at UGA so far. Through six games, Anderson is hitting .545 with two home runs, 4 RBIs, and he has three stolen bases.

Anderson’s first season at UGA was 2019 but was declared ineligible to play due to the transfer rule. He got off to a hot start in his second season, but the season was cut short due to the COVID-19 pandemic. In 2020, he became the first Bulldog since Gordon Beckham in 2008 to end a season with a batting average above .400 and had the highest mark for a Bulldog player since Buck Belue averaged .447 all the way back in 1982.

Last year was his first full season for the Bulldogs, and it did not go according to plan. Anderson’s batting average plummeted to .206 after batting .414 in the COVID shortened season the year prior.

“Team-wise, we got snubbed from the postseason and I didn’t have the season I wanted,” Anderson said. “I kept my confidence up and tried to have fun, and now I’m playing at the level I expected to this year.”

Anderson got a confidence boost when his fellow players elected him as a captain earlier this year.

“It meant a lot, the guys think I work hard and do everything the right way,” Anderson said. “All the hard work I did leading up to the season, my teammates saw it, and it’s good to know it’s paying off.”

Anderson has one year of eligibility left but does not know if he will keep playing at college beyond this year. If he keeps up the torrid start to the season he may take his chances at professional baseball. However, he knows his baseball career will eventually end, which is why he has plans to attend medical school.

Anderson is more than just brawn; he was named to the SEC Academic Honor Roll during his sophomore and junior season.  Anderson graduated with a degree in biochemistry last year and is now a graduate student athlete.