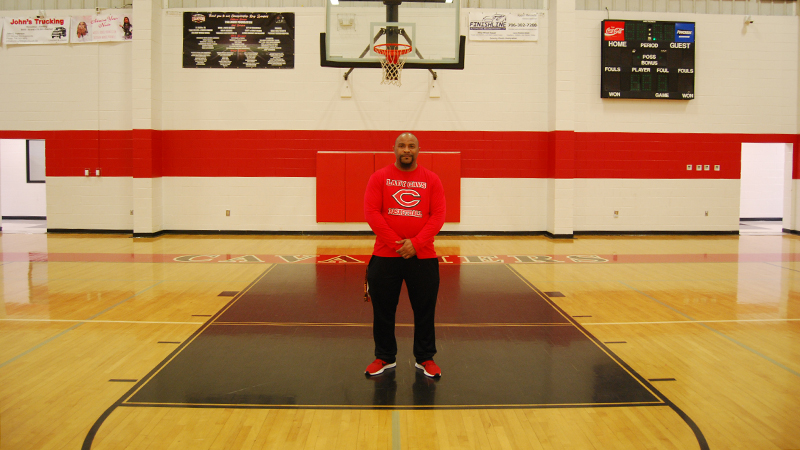 Martin played minor league baseball, but his love for basketball remained after he suited up for LaGrange.

Martin started as an assistant basketball and football coach at Troup County High School before he embarked on a career as the girls’ head basketball coach for the Cavaliers.

Martin started his journey at Callaway all the way back in 2011. The girls’ basketball program had only won two games the year prior, but Martin started brewing something special early in his tenure.

“The team was winning like two games a year, and I told myself that there’s no way to go but up,” Martin said. “I’ll never forget my first year I doubled the two wins to four wins and that got the ball rolling. That second year we were 16-9. We started raising the bar higher and higher.”

That was only the start for the program. He has led them to back-to-back region titles and state quarterfinal appearances over the last two seasons.

“These last two years have been really rewarding for me and my staff,” Martin said. “We just kept fighting and fighting. Of course, we did not get to the ultimate goal of winning a championship, but I’m still mighty proud of the accomplishments.”

Martin aspires to win a championship, something that was a pipe dream a little over a decade ago. He got a taste of a state championship as an assistant coach on the football team in 2020, and this has made him even hungrier to bring one home in basketball.

“Sometimes as coaches you get caught up in feeling like you underachieved or didn’t quite do as well as you should have,” Martin said. “When you really think about it and look at where you come from, where you’ve been, and where you are now, you can sit back and reflect and realize all the work you’ve put in has brought you to levels this program has never been to.”

Martin has a motto that “we don’t lose, we learn” which he presses onto his girls to keep their heads held high and their spirits raised. Martin has built such a strong relationship with his girls based on lessons from his dearly departed mother.

“I’ve got to credit my mom,” he said. “She gave me some pointers on how to have a relationship with girls. I listened to her about things I should and should not do.”

It is not a solo effort for Martin, he has relied tremendously on a network of assistant coaches, teachers and volunteers.

“Sam Cotton has been there with me since I’ve been here. Anything I asked him to do, he’d do it,” Martin said. “He was also one of those that mentored me and is somebody I can vent to. I can call him anytime, and he’d be there for me. Coach Eric Bowles came in and added a lot to the recipe,” he said. “He brought in some knowledge and saw some things I didn’t see. Miss DaVita Dean is like my mom or all the coaches’ mothers. She walks around and makes sure we have everything we need.”

He also credits bookkeeper Mary Spence, who has been keeping the books at Callaway since Martin has been there. He also called Trey Tucker a father figure and said the program would not be the same without him or any of these other figures that have made a direct impact.

These individuals and many others are why Martin loves being able to call himself a Callaway Cavalier.

“It’s a family atmosphere,” he said. “I feel like I can go to other people when I need help. I feel like I can share personal stuff with other coaches, and they’ll keep it confidential. I feel comfortable here, I really do. It’s a nice place to be.”