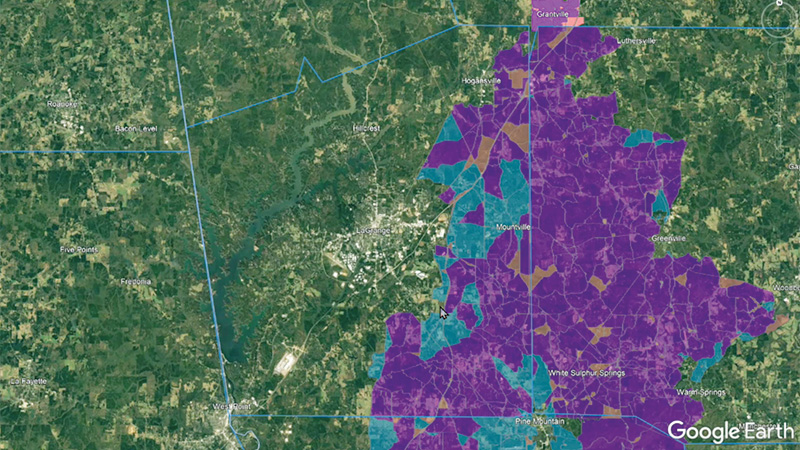 The featured map shows where Diverse Power is identifying areas within Troup County and neighboring counties that are most in need of broadband service. As noted by Diverse Power Senior Vice President and Chief Operating Officer Randy Sheppard, the green areas are areas served by the state of Georgia, the brown areas are census blocks meaning that the state of Georgia declares that there are no homes in those areas and the purple areas are unserved broadband areas.

Diverse Power updated the Troup County Board of Commissioners Tuesday on how the company plans to make the most out of its recently awarded $25 million American Rescue Plan Act grant. Diverse Power plans to use the funds to bring high-speed broadband expansion within Troup County, particularly in many of the county’s underserved areas where competitors cannot reach.

“We did not go into this prior or after the grant [process] trying to go into areas and compete where there are already providers,” Diverse Power Senior Vice President and Chief Operating Officer Randy Sheppard said. “We’re trying to get [broadband access] to people who don’t have it, and those are going to be the hardest ones to reach. There are holes here, there and all over, you can imagine what it’s like to build a network with all those holes.”

Diverse Power will invest a total of $39 million total to expand broadband internet access through the company’s subsidiary provider, Kudzu Networks. The expansion will incorporate portions of Harris, Troup, Meriwether, Quitman and Coweta Counties. In Troup County specifically, the company is targeting more of the eastern and southwestern portions of the county around Mountville and the Greenville areas and east and southeast of Hogansville.

Though a start date has not yet been announced, the project is estimated to take 36 to 48 months to complete, Sheppard said.

Diverse Power will use the funding to serve 4,770 customers with limited to no access to broadband. Sheppard said Troup County has about 1,300 underserved broadband access households. Areas like Meriwether County have as many as 1,600. The total project should encompass an estimated 710 square miles of Diverse Power’s 15 county service areas.

Sheppard noted that Diverse Power wanted to inquire for more than the awarded $25 million but decided to start at a smaller amount in order to ensure that their request would be considered.

“We came to the consistency that we really out to cut [the asking amount] off at [$25 million] and get a viable project, not ask for a pie in the sky number and get turned down,” he said. “We were trying to get the biggest [and] continuous bang for our buck and serve the most underserved areas,” explained Sheppard. “Obviously, there are more underserved areas in Troup County, but [we targeted areas where] we felt like … growth was set to happen.”

Through ARPA, a total of $408 million was awarded to 49 recipients, including seven EMCs.

The goal is to provide fast and reliable internet service to communities, households and businesses in 70 counties in rural parts of the state.