The William J. Griggs Center renovation project is still on schedule, and with the project’s groundbreaking set for this spring, the Troup County Parks and Recreation Department is finalizing its list of wants and needs for the facility.

Despite rising material costs, Troup County Parks and Recreation Director Lance Dennis said he feels confident that the department will be able to fulfill all needed additions and repairs, give or take a few minor adjustments.

“This is no longer a $4 million project… but I think we’ve got a pretty good grasp on it,” Dennis said, adding that the department will need about $1.5 million more to fully fund the project’s additional phases. “We’ve gone the extra mile to make sure that everything that is critical is included. We may make some differences in things like glass, smaller things like that.”

The concept of renovating the Griggs Center has been in the works for roughly three years, Dennis said, when the last of the county’s SPLOST V funding came through. During this time, $300,000 was allocated specifically for the Griggs Center. The outside pool, which is currently in disrepair, was near the top of the parks and recreation department’s list of needed repairs. Due to the overwhelming cost of keeping the pool maintained, the department had plans to tear out the center’s outside pool and build a splash pad in its place. However, at the insistence of the late Commissioner Richard English Jr., these plans were scrapped. 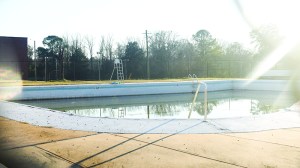 The Griggs Center’s pool, seen above, will be one of the more costly aspects of the project. Currently, the pool is out of use and blocked off to the public.

“He came to me and said this is not acceptable for the community, and we need to do better,” Dennis recalled.

Following public input sessions from the community and former Griggs Center athletes, the department was able to formulate a list of wants and needs. As large-scale plans came into fruition, the Callaway Foundation stepped in to offer $2 million toward the project on the condition that the city and county contribute $1 million of their own. Both did this in 2021.

In late 2021, the Troup County Parks and Recreation Department hired the project’s construction manager, Torrance, for the Griggs Center project.

The project currently consists of three phases, the first of which includes the expansion of the facility’s parking lot and adding an additional, more functional gymnasium. Phase II will involve installing a new zero-entry swimming pool with a slide and an area for lap-swimming. Phase III will involve enhancing the facility’s tennis courts.

According to county documents, a not yet budgeted Phase IV will include the construction of an amphitheater.

Phase II and III of the project will cost $3.25 million and $1.25 million, respectively.

The gym plans on their own are a heavy expenditure, Dennis noted. Attempts were made to expand the gym from its current state during a previous renovation nearly 20 years ago but were mostly abandoned due to budget constraints, he said.

“Right now, it’s so small we can’t even play any regulated games on it,” Dennis said. “It’s not even near regulation-size. We use it for picture day, and that’s about the extent that it gets used.”

The plans to incorporate a functional pool come with a hefty price tag as well, Dennis said. The department had hoped it could request funds from the governor’s second round of American Rescue Plans Act (ARPA) funds so that the pool could be an add-on in Phase I, but they were recently denied those funds.

Along with athletic and recreational components, plans are in place to incorporate computer labs and study rooms into the facility, adding a needed education aspect to the facility that the Callaway Foundation requested, Dennis noted.

The educational area will be placed in the facility’s repurposed small gym, which will also be used for a concession area.

At the top of the department’s list is getting rid of the Griggs Center’s on-street parking. A hill on Glenn Roberston Dr. at the facility’s entrance obstructs the view of the parking lot, creating a safety hazard for drivers.

“That is the number one priority,” Dennis said.