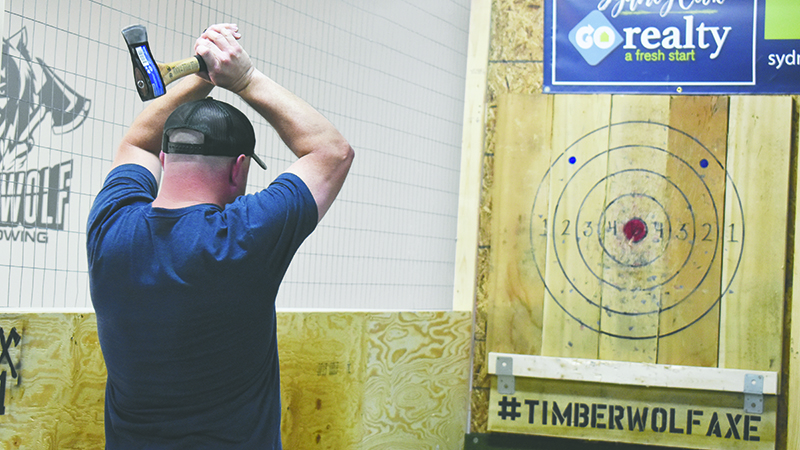 If you’re looking to start a new business venture in LaGrange, Chop House Axe Throwing might have the deal for you.

The business announced on Facebook Thursday that it is looking to sell the turnkey business to new owners so that it can continue to be open for the LaGrange community. Owner Justin Daniel said he just received a promotion in his day-to-day sales job and his family is moving.

As a result, they won’t be able to keep the ax-throwing business going after April 30, which is the day the lease runs out on the current property at 1300 Lafayette Parkway, Suite F-1.

Daniel didn’t say a sale price, but he said the business is priced to sell. He asked that anyone with a serious inquiry in buying the business contact Chop House at 770-548-3050.

“All the heavy lifting has been done,” Daniel said. “You literally just come in and assume the responsibility like the rent, the month-to-month bills. The build-out is done. All the equipment has been purchased, like the tables and stools, the axes — I mean, everything’s done.”

The ax-throwing business first started in May 2021 under the name Timberwolf Axe Throwing. Daniel said several issues with Timberwolf led to the company separating out and becoming Chop House.

Regardless of the name change, he said the business has been supported by the community.

“We’ve had consistent support,” Daniel said. “I’ve always had sponsors the entire time we’ve been open. I think like right now, out of all my lanes, I only have three lanes right now that aren’t sponsored. Everything else is sponsored. So, we’ve had great support from local businesses in the area.”

Daniel’s hope is that someone interested will purchase the business and keep it going in LaGrange. He said if someone wanted to move the business, they could, but they could also assume the lease at the current location.

“We’ve always tried to make it a very fun experience,” Daniel said. “I don’t think we’ve ever had anybody who didn’t have a great time. We’ve always tried to make it really cool and a lot of fun for LaGrange and a business that we can be proud of. It is with a really heavy heart that we’re making this decision, but we’re kind of in a position where we have to. We don’t really have a choice.”