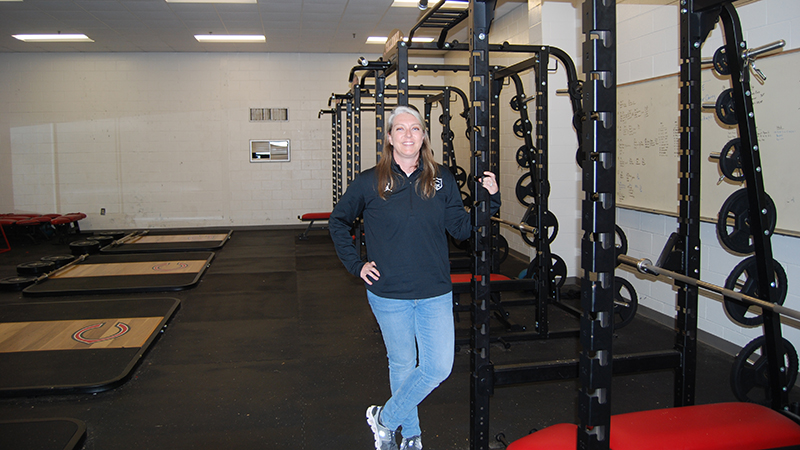 Brooke Jackson is the longest tenured athletic trainer in Troup County. She has been at Callaway High School for more than a decade now.

Jackson had opportunities to leave early in her career as a Cavalier and nearly took one, but now she is a Cavalier through and through and cannot imagine being anywhere else.

“After my first year here, I thought I was leaving. I was new here and I was having a hard time adjusting,” Brooke said. “In my second year, some coaches scooped me up. Once I started making friends with them, I was like this isn’t work anymore, this is just hanging out with my buddies. I am a proud supporter of Callaway athletics. I will only wear red and black. I’ve had other opportunities, but I didn’t want to go.”

As a long serving athletic trainer for the Cavaliers, Jackson has seen the whole gambit of injuries.

Jackson does so much to help the athletes in the moment of their injury, but also before and after their injuries as well. Watching an athlete go from square one all the way back to full health brings joy to Jackson.

“When we made our run to the state championship, we had a kid that was very good for us got injured one day at practice, and we thought his season was done,” Jackson said. “We grinded every day for five weeks, and he ultimately came back and played a big role in our game.”

This is just one example of an athlete at Callaway trusting the process and trusting Jackson. She has brought back so many Cavalier athletes over the years.

“The most satisfying part is seeing the kids return to play and their happiness,” Jackson said. “A lot of times their family is more happy for that kid. Seeing the parents trust me and the kids work their rear ends off is fun.”

Jackson has been integral to every athletic season since her arrival at Callaway in 2011. She is every bit as impactful as the coaches are during their respective seasons.

“Maybe I can’t draw up Xs and Os, but I can literally tell you how somebody is injured and potentially save somebody’s life,” Jackson said.

Jackson has just escaped one of the two “terrible” months for athletic trainers where so many sports overlap it strains her ability to care for all the Callaway athletes.

“The end of February and September/October have like three sports going on,” she said. “You have basketball finishing, baseball starting, soccer starting.”

Jackson has numerous responsibilities as the sole athletic trainer at Callaway, many of which go largely unnoticed.

“Yeah we do tape a lot of ankles. Yeah, we do put a lot of Band-Aids on, but a lot of people don’t realize the mental part of the game I play with a lot of our athletes,” Jackson said. “If a kid doesn’t think his knee or his ankle or is going to do well, I kind of have to be a mental support for them. That’s something I don’t think a lot of people realize I deal with.”

Jackon’s responsibilities start at the beginning of the day and end when the sun goes down in the evening. Many people don’t realize her duties are more than just helping athletes out during games and practices.

“[My responsibilities] are during the whole day,” Jackson said. “For example, yesterday morning I sent an insurance paper before school even started, I talked to two parents on my way to school, called a coach and then I did rehab during the first period while I was running weight training. I rehab students throughout the day and if we have games, I stay and go to the games and if we have injured athletes I go to that sports area and do rehab with them.”

Time has flown by for Jackson. One day she looked up and over 10 years had passed as the Callaway athletic trainer. She works tirelessly behind the scenes with little to no praise outside of the confines of the school. Jackson works these long hours because of the love she has for the students and her school.