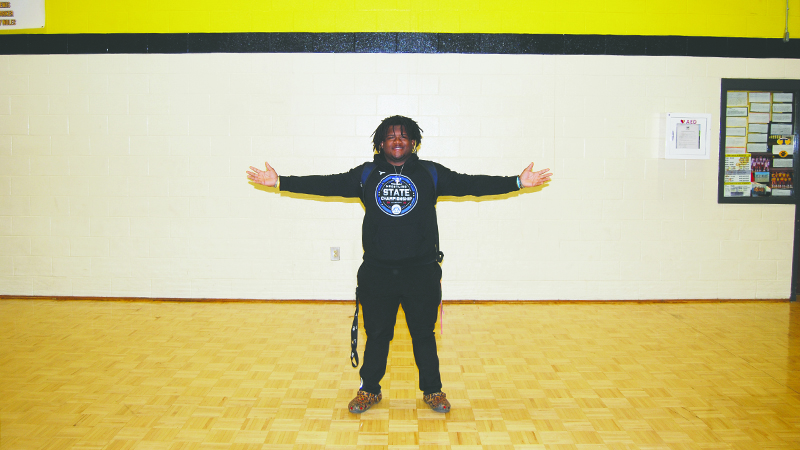 Braxton Truitt is a dual-sport athlete at Troup County High School. He is a two-way player on the football field and a wrestler on the mat.

Truitt began his football career way back when he was six years old, but did not begin his wrestling career until his junior year of high school.

His friend and elite wrestler Kullum Irvin convinced him to give wrestling a go, and now his only regret is that he did not start sooner.

“At first, I didn’t think I was going to like it,” Truitt said. “I didn’t like the practices because wrestling is way different than football. Wrestling is constant one-on-one with nowhere to go and no breaks for six minutes.”

Now, Truitt loves the controlled craziness of wrestling. He stuck with it despite his initial reservations and finally realized his potential and enjoyment from being on the mat.

“I kept going to the practices and eventually we had a tournament, and I was winning matches,” he said. “After I started winning, I saw why people enjoyed [wrestling].”

Over his two years wrestling for the Tigers, Truitt had learned a lot from Coach Drew Garner about life on and off the mat.

Truitt stays professional on the mat but also on the football field as well. He has starred for the Tigers as an offensive lineman all four years at Troup County High School and got to play on the defensive line his senior year. That led to one of his favorite memories as a Tiger — getting his first sack of his career against cross town rival LaGrange during the 2021 season. Truitt has another fond memory from his freshman year too.

“We had an OTA (organized training activity) at Jones County ,and we stayed overnight in the gym,” Truitt said. “We were goofing off, throwing water bottles with no top across the gym. At one point Coach G(lisson) came in there and told us if we kept making noise we would have to run suicides in the morning. We waited about 15 minutes and then started throwing water bottles again.”

Troup County head football coach Tanner Glisson has helped Truitt unlock his potential, but there was another coach who noticed his potential as a freshman: former Troup County and current LaGrange College offensive-line coach Phillip Manning.

“When we first got up here, he took our JV group aside, and I noticed he would pull me out of the group and have me do other workouts and I always wondered why,” Truitt said. “I guess he noticed I was better than some of the people in my group. I believe that he believed he saw something in me and as time went on I started seeing it in myself.”

“When we run out of the tunnel and I look back at the crowd and the student section is chanting my name, it makes me feel like I’m more than just another student,” he said.

Before he comes barreling out of the tunnel, you can find Truitt listening to NBA Youngboy and  R5 Homixide to get his blood pumping. Truitt enjoys having a Chick-fil-A sandwich and of course some freshly squeezed lemonade before he takes the field.

When he’s not at school or participating in athletics, he likes to dominate his friends in video games, such as NBA 2k and Madden.

After his senior year wraps Truitt plans to attend West Georgia Tech and major in business so that he can get his CDLs. He hopes to be a big rig driver at first before settling back down in the area with eyes on a job like driving for UPS or FedEx.

Truitt has a lot of people that he looks up to, but none more so than his father.

“No matter what situation he’s ever been in he’s going to feed his family,” he said. “Ever since I’ve been old enough to drive I’ve had a vehicle. My dad makes sure I have it all. He makes it to where I never have any worries outside of school.”