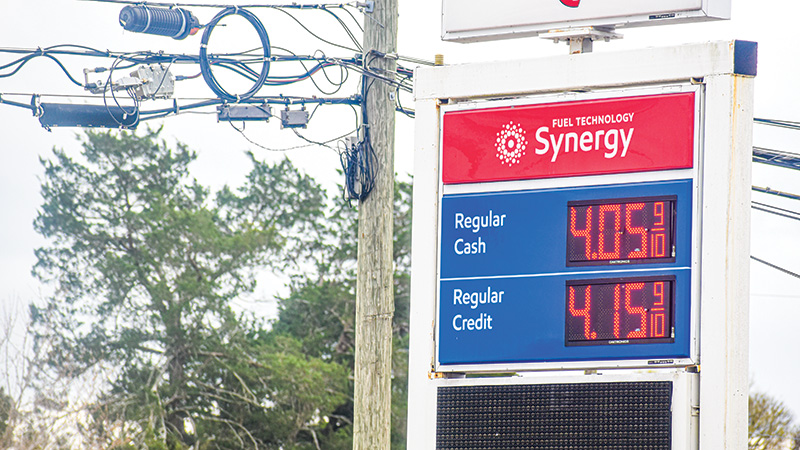 “Look at this,” said Merrie Kent, a West Point resident, as she pumped gas into her car Saturday night. Kent was referring to the price of gasoline, which had started to balloon to over $4 mark at several area gas stations. She said last year it took about $35 to fill up her 2017 Lincoln. Saturday it cost her nearly $60.

“Half of that will be gone by Tuesday,” she said.

Kent said she commutes regularly to LaGrange to shop at Walmart and Kroger to find items that stores around West Point are out of, a routine that has become increasingly expensive in the last several months.

Kent is among many residents who are feeling the sting from the recent rise of prices in general. She said she’s made due in the last few months locating items at dollar stores and other grocery stores, but the cost of traveling has urged her to stick closer to home.

“I’m just going to have to do without certain things,” she said. “If [gas] gets any more expensive, I won’t be able to go anywhere but work and church.”

According to a recent study from AAA, the ongoing conflict between Russia and Ukraine caused oil prices to surge above $110 a barrel for the first time in a decade.

This is the first time that gas has been this high since 2008, during the Great Recession.

Ronald Hampton, a LaGrange resident, said he was disgusted at the recent uptick.

He said he received a “modest” pension from the Georgia Department of Transportation and ultimately lived comfortably on that and his social security benefits. However, the uptick in gas prices has him clutching tightly to his wallet and searching for answers.

“You think this would have happened [when Trump] was president? Any of this?” he said.

“Gas was under $2 a gallon then. What happened? I don’t know what [Biden is] doing, but it ain’t right.”

Rebecca Fleming, a mother of two from Hogansville, commutes roughly 35 minutes — or over an hour each day — four days a week to Newnan where she works at Hello Fresh.

The money she earns just helps her pay the bills, she said, but the rising prices of gasoline has her concerned for her and her children’s well-being. Finding a second job is not in cards for her right now, she noted, as she would not be able to see her children.

“It’s getting ridiculous,” Fleming said, adding that she essentially lives “paycheck to paycheck.”

Her monthly expenses in February averaged out to in $3,782 in February. Her monthly rent for her house in Hogansville is $775. Putting money back money for emergencies is nearly impossible, she said.

In the last two weeks, she’s spent $84 dollars on gas to get back and forth to work, run her errands and take her oldest child to school.

She said she does the majority of her shopping at the Walmart in LaGrange but ventures to the dollar stores in Hogansville for smaller items.

Fleming said she was previously receiving food stamps to help her with groceries, but has since stopped receiving them. Currently, she spends as much as $300 a month on groceries for her and her children, a two and seven-year-old.

Her mother looks after her children while she’s at work, she said, helping her save on child care.  A recent saving grace has been in the form of her tax returns, Fleming said, which has helped her catch up on bills.

According to a recent report from the U.S. Bureau of Labor Statistics, food-away-from-home, or restaurant purchases, increased 0.7 % in January 2022, which was 6.4% percent higher than January 2021.

As the Russian invasion of Ukraine continues, the United States and its allies have imposed sanctions in an attempt to strangle the Russian economy. Energy giants like Shell announced this week that it would stop buying Russian oil and natural gas. On Tuesday, President Joe Biden announced plans to ban Russian oil imports, toughening the toll on Russia’s economy in retaliation for its invasion of Ukraine.