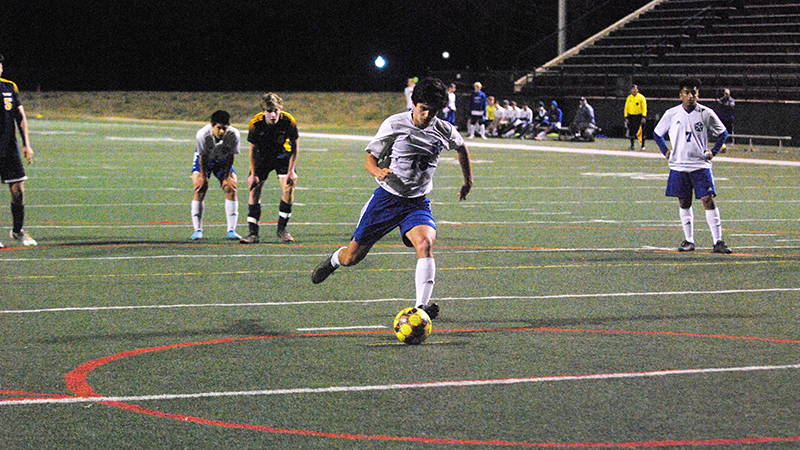 The LaGrange boys soccer team pulled out a 4-0 victory Wednesday over cross-town rivals Troup County. The Grangers came into the game on an eight-game win streak and the Tigers were riding a seven-game win streak, so something had to give.

“It’s unfortunate that somebody had to lose this,” LaGrange head coach Shane Pulliam said. “I’m glad that we did enough to come out on top.”

The game started slowly with LaGrange dominating possession, but not carving out any real clear-cut chances in the opening moments of the game. This changed when Jan Alvarado was played clean through on goal but saw his shot saved by Daniel Orantes in the 18th minute.

“As much as they possessed the ball, they didn’t create a lot of chances early,” Troup County head coach Eddie Lawson said.

The game was deadlocked before the ref called a soft penalty kick in the 29th minute with the Granger player not even going to ground. Tripp Hollstrom stepped up to the penalty spot and buried the ball in the back of the net to give the Grangers a 1-0 lead. Any Troup County momentum going into the break was killed when Bryce Kuhn stepped into midfield and played a line-splitting pass to Alvarado, who teed the ball up for Hollstrom to score his second goal of the match with only 13 seconds left in the first half.

Davis Knight and Andy Patton each grabbed a goal in the second half to put the game to bed. Davis scored his 14th goal of the season, which leads the team. Patton also had an assist in the game when he provided a pass to Davis that he buried in the back of the net.

This night belonged to Hollstrom though as he was the man of the match with two goals and an assist.

For the Tigers, it was Orantes who stood out as he was called on to make saves time and time again.

“Our goalkeeper played out of this world,” Lawson said.

“They had a really good goalkeeper,” Pulliam said.

Despite the scoreline in the Grangers favor, Pulliam knows they will have to clean up their play going forward.

“We have to be a little smarter in how we attack,” Pulliam said. “We forced a lot of things when we didn’t have to, so when we play McIntosh on Monday that will have to be a lot better.”

LaGrange will have to play McIntosh on March 14. McIntosh is one of the best soccer teams in the state and have won the last two AAAAA state championships, but there is more on the line than just the game as the head coach of McIntosh, Bunky Colvin, was roommates with Pulliam in college and each will want bragging rights over the other.

LaGrange is now on a nine-game winning streak and climbs to 9-1-1 overall and a perfect 4-0 in the region.

Troup County sees its seven-game winning streak snapped and falls to 7-2 overall and 2-1 in the region.

The Tigers next game is away to region foe Hardaway on March 14.