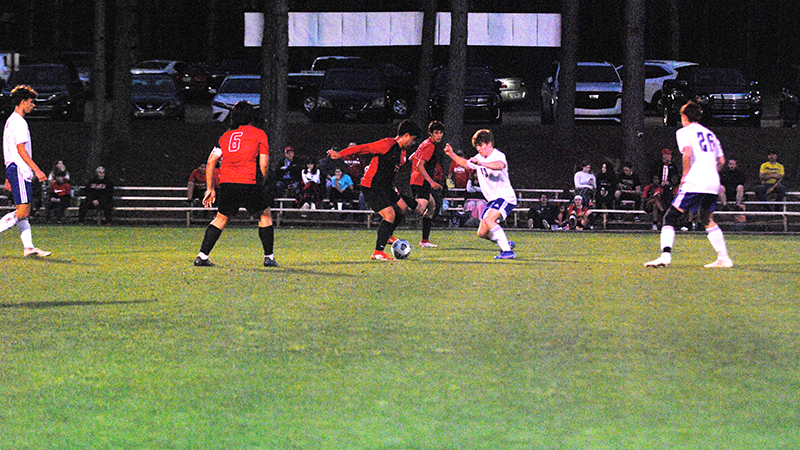 Brett Belton had a goal line clearance in the fifth minute to keep the score level, but the deadlock was broken when there was a mix-up at the back that led to an easy Bremen goal off a corner kick. This was followed by a stunning half-volley from outside the box a mere minute later to give Bremen a 2-0 lead.

“Those two back-to-back right there in the span of a minute hurt,” head coach Mike Petite said. “We battled through it and fought back.”

Callaway nearly answered in the 15th minute when Journee Jordan hit a lob shot over the goalie only to see the ball bounce off the post and out.

The Cavaliers forced the Bremen goalie into a triple save in the 47th minute as they could not beat the goalie and put the ball in the back of the net.

“We had three chances in a row and the keeper made three amazing saves,” Petite said.

Nitler Recinos had a monster night in goal to keep the score line manageable. He saved a penalty kick in the 30th minute and made two huge one-on-one stops in the 44th and 52nd minute. He followed this up with a lunging full-stretch save on a free kick in the final minute of the game.

The Cavaliers had to shuffle their lineup because of injuries and had more than one player playing out of their natural position.

“Blake Eubanks is normally a forward, but we had him playing center back tonight,” Petite said. “Our starting center back Avery [Brooks] has been out for the past couple of days.”

“Connor Davis, our attacking center midfielder, was also out with an injury. Jostin Raymundo, who is normally our center forward and playmaker, had to go back to the midfield.”

Nelson Herrera rallied the troops after the game with an emotional post-game speech. Herrera preached about sticking together like brothers and not letting a single game define the team.

Callaway drops to 9-2-1 on the season and 2-2 in region play. Both loses on the season have come against Bremen. The Cavaliers next game is at region opponent Haralson County on March 15.