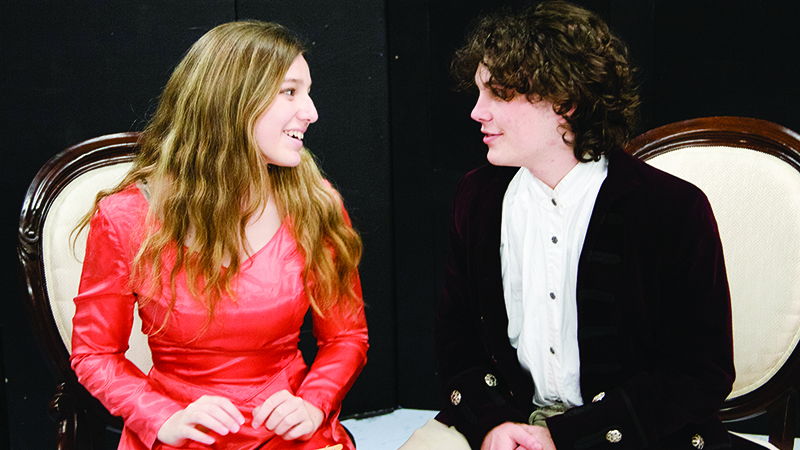 The Lafayette Theatre Academy is bringing a new adaptation of Louisa M. Alcott’s classic Little Women to the LSPA Black Box Theatre stage beginning March 17. Students and staff of the academy have worked since October to craft this story for audiences and have been involved in every aspect of the production, from script to stage.

In addition to preparing for their character roles, students also assisted with costuming, set construction, technological design, and the writing of the script. Director Amy Guinn shares that “one of the most enjoyable parts of working with a creative cast of students is discovering their hidden talents and giving them the freedom to take ownership of so many elements of a production.  Theatre truly provides a place for every artist and the collaboration among this cast has led to a sense of ownership for everyone involved.”

The story of “Little Women” begins the day before Christmas in 1862, while the country is in the midst of the Civil War. Even though the setting takes place 160 years ago, the joys and trials of the March family easily relate to those experienced today. From the warmth of the March home, family values help four sisters navigate their journey from adolescence to adulthood.

Celebrations, reunions, birth, loss, economic struggles, societal limitations, and more unfold over a storyline that spans the next decade. “Little Women is a story about family perseverance. After a series of unfortunate events fall burden to the family, they are forced to bravely overcome any obstacle that crosses their path,” said Nathan Lamb, who plays the role of John Brooke.

The four March sisters – Meg, Jo, Amy, and Beth – are well-known in classic literature. However, they come to life on stage through period costuming and a look inside their home.

Emmi Horlander said she enjoys the character of Beth.

“She is such a generous and kindhearted character. I think she is one of the best characters in the play,” she said.

The set décor is filled with many items created by the cast. Rehearsals have included time for the students to learn crafts from the mid-1800s and they are making those available at the shows for guests to purchase in support of the production.

Guinn said many of the cast members have younger siblings and they wanted a special way for them to relate to the characters on stage.

“Amy’s paintings, Jo’s writings, Meg’s sewing, and Beth’s flower-crafts will all be available and special VIP packages will include a small item from each sister and a chance to talk with the cast after the show,” she said.

Beyond enjoying their time on stage, the interaction the cast has with each other during rehearsals and classes provides many benefits to these students.  Lamb said that “the cast members are all awesome individuals that brighten my day, provide me with more immense amounts of self-confidence, and are all just a joy to be around.”

Horlander agrees that she “likes theatre because of the welcoming and friendly community. Everyone is supportive and kind to each other, and theatre has helped (her) become more confident in (herself).”

Presented by Kimberly-Clark and sponsored by Kemp’s Dalton West Flooring, Alcott’s beloved story of the adventures of the four March sisters comes to life on the stage for five performances, March 17th through 20th. This original adaptation provides a heart-warming theatrical experience for the entire family. The venue is the LSPA Black Box Theatre located at 214 Bull Street in downtown LaGrange, Georgia. Tickets for Little Women and additional Lafayette Society for Performing Arts productions can be purchased by visiting their website at LSPArts.org or by calling LSPA’s box office at (706) 882-9909 during business hours. General seating: ($18 adults/$13 students). Box office hours of operation are Monday-Thursday, 10 to 4 p.m. The box office also opens an hour before each performance begins.