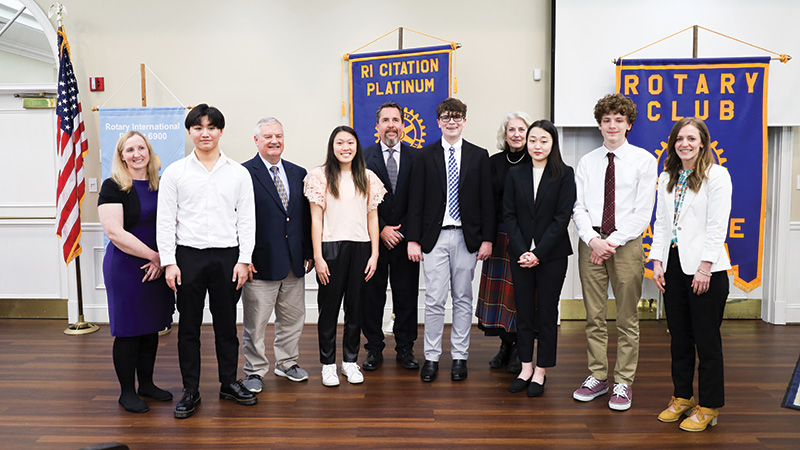 Five students and teachers from Troup County’s high schools were honored during the 2022 Student Teacher Achievement Recognition (STAR) on Wednesday, hosted by the LaGrange Rotary Club.

The chosen students, Charlie Lin (Callaway High School), Isaiah Jon Tusing (Lafayette Christian School), Eun Seo Cho (LaGrange Academy), Lauren Grace Park (LaGrange High School) and Carson Paul Huff (Troup High School) had to have the highest score in one sitting on the three-part Scholastic Assessment Test taken through the November test date of their senior year. They also had to be in the top 10% or be one of the top 10 students of their class based on grade point average.

“This county produces a lot of talent,” he said. “When people talk about kids these days, I don’t believe they’re [just] kids these days. They’ve different than we were, and they should be because the world is changing. They’re going to be the leaders of the future, and we should all be proud of that.”

For the occasion, students also prepared a response on the topic of: “The STAR teacher I chose made a difference in my life.” Each student read their response at the podium with their teacher by their side.

Isaiah Jon Tusing from Lafayette Christian School was named Troup County’s overall STAR Student. For this honor, Tusing will advance to the regional competition in Columbus on March 14 and the winners at that level will go on to compete for the state STAR award.

Tusing chose Whitney Humphries as his STAR teacher because of how she helped him succeed in particularly challenging AP classes but also helped him come to terms with religious subjects.

“I was raised in a Christian environment my entire life … but I had a lot of questions and a lot of internal angst,” Tusing said. “That began to change when I took health. [The class has] consistent, deep discussion surrounding questions and topics of the world. Mrs. Humphries’ devotion to being open and honest and dedicated [to answering questions.]”

Lin plans to attend Georgia Tech or the University of Georgia and study computer science. He chose Keauna Shoemake as his STAR Teacher due to her dedication to helping him and other students understand rigorous class material, especially during the early stages of the pandemic when the class was learning virtually.

“During this time, I was learning virtually due to being in close proximity with another COVID-infected student,” Lin recalled. “I found I was having trouble staying focused … however, [Shoemake] ensured all quarantined and online were comfortable asking questions about topics we discussed. She wore a headset to ensure that the questions we asked were heard and ensured the additional privacy of her students. In conclusion, Mrs. Shoemake is a pretty cool teacher.”

Cho, who plans to study international affairs/political science when she chooses a college in either America or South Korea, chose Janice Ingram due to how she assisted her with finding comfort in difficult subjects and in herself. Ingram, who has taught at LaGrange Academy for 27 years, will retire this year. She has been selected as a STAR teacher 13 times.

“I first came here about three years ago … and due to some differences in Korea and the west, I never took any advance science classes … but I had to take chemistry to graduate, and I was kind of scared,” Cho said. “The more I took [Ingram’s] classes, the more I got into science and I decided to take all these advanced science classes. She helped me pursue something I was scared of and not comfortable with. She also helped me with myself, as I struggled with perfectionism. She always reminded me that it’s OK to be slow and make mistakes.”

Huff, who plans to attend the Georgia Institute of Technology and study biomedical engineering, chose Chance Giddens as his STAR Teacher due to how he kept many of Huff’s advanced classes interesting, even if they were early in the morning.

“I have never felt more prepared for the AP exams than I have in his classes,” Huff said.

“Outside of the classroom, Mr. Giddens has helped me tremendously in the college applications process by writing letters of recommendation to university and scholarship foundations.”

Park, who plans to attend Emory or the University of Georgia and study international affairs studies, chose Kenneth Moore as her STAR Teacher due to his support in both her academic and athletic endeavors.

“Even outside of class, I found that Coach Moore takes any chance to better his students,” Park said.

“He’s cheered me on at volleyball games and also helped me when I was applying to college.”

For over 60 years, a top academic senior in each participating Georgia high school has been named the STAR student for that high school. Created to focus public attention on Georgia’s outstanding students and teachers, this program showcases the academic achievement of students and a chosen educator who have been instrumental in their development.

The LaGrange Rotary Club has hosted the STAR Student recognition program for 64 years.