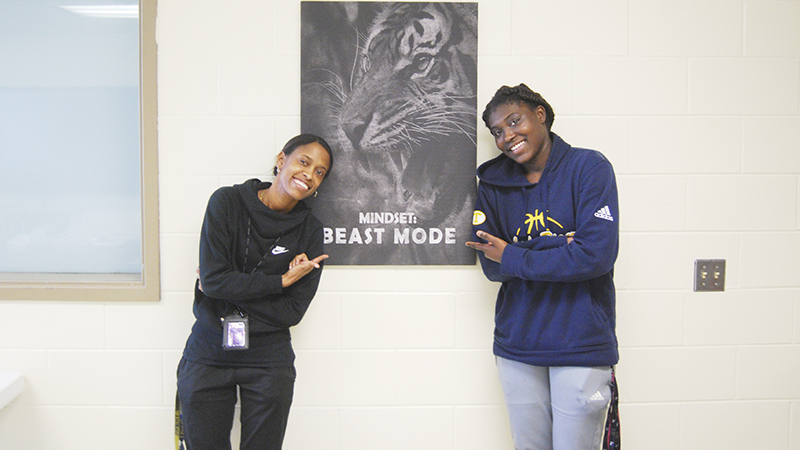 Alexcia “Lexi” Murphy has been named the girls’ region 2-AAAA player of the year. It is a monumental achievement that she did not see coming.

“I was shocked about it, I was really shocked,” Murphy said. “But I was proud of myself for being able to do that for my school and for myself. Honestly, I couldn’t tell you what my face was looking like when I first found out I won this award.”

While she did not believe this was possible at the beginning of the season, one person did.

“I thought it was possible,” Troup County head basketball coach Carla Thornton. “I’ve always thought very highly of her. Sometimes I have to remind her of how good she really is.”

Murphy was supposed to be the team’s number two offensive threat behind Tanieya Hegar, but Hegar was lost to a season-ending injury early in the season, which opened the door for Murphy to be the teams’ top offensive weapon.

“I had to tell Lexi ‘your role is about to get way bigger, and you’re going to have to do way more, and it’s not that you can’t do it, you’ve always been capable of doing it,’” Thornton said.

For Murphy, there was a bit of trepidation that trickled in when she found out about her new responsibilities.

Murphy picked her game up tremendously in a region filled with a lot of basketball talent. For her to win this award says a lot about her game on the court.

“We’re in a region with Carver, who is a perennial powerhouse,” Thornton said. “There’s a lot of great girls in our region, and I’m glad that other coaches saw Lexi’s ability too.”

Thornton and principal Niki Watts believe Murphy is one of Troup County’s best and brightest students. Murphy knows that she has to balance her academic endeavors with her athletic ones to be a successful individual.

“If I want to be an athlete and go to college and be somebody after college, I have to do my schoolwork, so that has to come first before basketball,” Murphy said.

Murphy is only a junior and has seen her game grow immensely on the court over the last six months. Her ability to drive to the hoop and finish through contact is what has made her so impactful during her third season as a Tiger. She has stopped settling for so many jumpers and now seeks out mismatches, so she can drive to the basket and finish in the lane.

However, there is still room to grow going into her final season at Troup County. She believes her dribbling has to improve, and Thornton thinks that she needs to keep her head up and on a swivel when she has the ball in her hands.

Still, this was the best season Murphy has had as a basketball player. Last year was a bit of a down year after such a promising freshman season.

“I was in a slump last year,” Murphy said. “I wasn’t really playing like myself.”

Thornton believed in her despite the fact she had a relatively down sophomore season.

“This beautiful lady right here (Coach Thornton) brought me out of my shell,” Murphy said. “This year she really helped me get out of my slump.”

Not only did Murphy get out of her offensive and defensive slump this year, she also took on more of a leadership role.

“I had to lead the team this year,” Murphy said. “When my team was down, I had to lift them up.”

The Tigers got off to a 3-8 start in their first 11 games. The playoffs seemed like a far-off reality. Murphy was able to rally the Tigers as they went 13-6 in their last 19 games of the season. Murphy’s leadership and basketball prowess helped them finish second in the region and make a run to the second round in the state tournament.

Murphy still has her senior year left at Troup County and hopes to make it a special season for herself and the team.

“I want to combine what I did from ninth grade to now into my 12th grade season,” Murphy said. “That’s the goal and to win (the state championship) for coach (Thornton).”