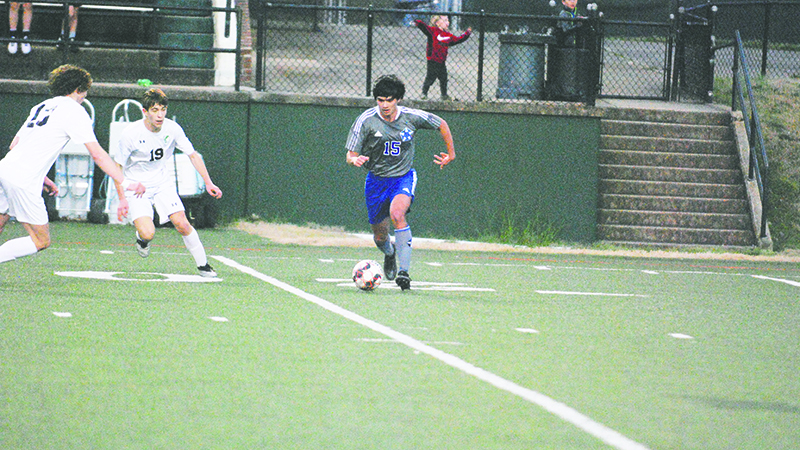 The LaGrange boys’ soccer team nearly came back to pull off an upset over McIntosh on Monday but ultimately fell 3-2. McIntosh is one of the best teams in the country and finished last season ranked no. 1 in the nation.

This was the first game all season where the Grangers conceded more than two goals.

McIntosh grabbed the opening goal in the 22nd minute before scoring another one on the eve of half time.

The second half began as a bit of a stalemate before the Chiefs scored another goal in the 72nd minute to take a commanding 3-0 lead.

With only eight minutes left in the game the Grangers put on their rally caps. Just 18 seconds after the Chiefs scored their third goal, Davis Knight put in a scintillating ball to the back post that Logan Metcalf buried in the back of the net. With less than two minutes left of the 80 in the game, Knight grabbed another assist when he played a cross in that Bryce Kuhn met and out in the back of the net.

“We found a way to scratch back in,” Pulliam said. “I think we just ran out of time.”

The Chiefs used time wasting tactics to drain the last couple of minutes off the clock as the Grangers had wrestled all the momentum away in the game.

This was a monumental achievement for the Grangers as McIntosh brushed past them with ease in years past.

The Grangers saw their nine-game winning streak end and suffered their first loss since their opening game on Jan. 25.

For Pulliam this game was a bit more personal as the head coach of the Chiefs, Bunky Colvin,  was his college roommate.

“We do things a lot alike,” Pulliam said. “We know each other pretty well and try to come up with a way to surprise them.”

The Grangers fall to 9-2-1 on the season, but keep their perfect 4-0 region record alive. LaGrange’s next game is at region foe Spencer, who is also perfect in the region, on March 16.