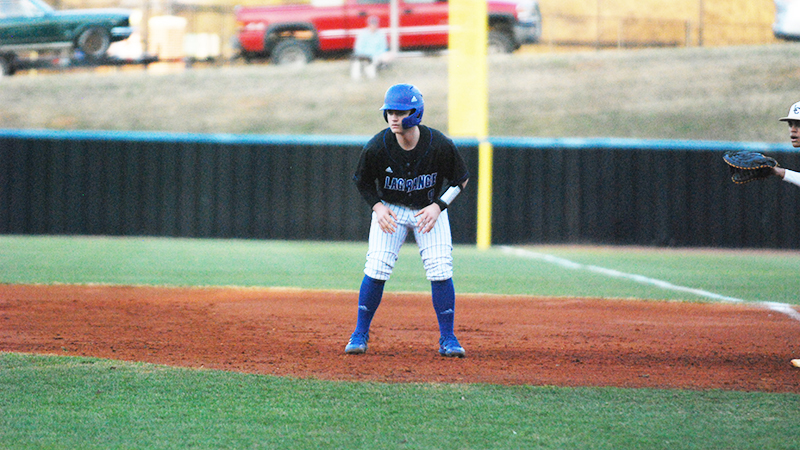 The walk-off double Stephens dropped into left field was a massive moment for a player that is only a freshman.

“I was feeling great,” Stephens said. “All the hard work I did paid off, but I know I have to keep that same confidence going in every other game.”

Stephens started playing baseball at about five or six years old and stuck with it because of the love he has for the game. He has found a home at first base but bounced around from position to position early in his baseball career. He started at second base before transitioning to catcher. He started playing first base at around 13 years old when his travel ball coach asked him to play first base. He was a bit trepidatious at first, but soon settled down in his new home on the baseball diamond.

“At first, I was kind of confused because I didn’t know first base,” Stephens said. “My coach told me ‘if you can play first, there will be multiple positions you can play, and it will be better for you in the long run.’”

Stephens bought it because of the strong relationship he had with his travel ball coach, Shannon Snyder, who talked him into the transition from catcher to first base.

“He stuck with me for about five years now,” Stephens said. “He’s the one who transitioned me from catcher to first and when he transitioned me he had faith in me the whole time.”

Stephens is already turning into a star in his first season as a Granger, but he also plays travel ball with Five Star National out of Warner Robins. Stephens notices subtle differences between travel ball and high school baseball.

“In travel ball, it’s like you’re at the field all day but with high school you play three games a week and you have to balance that with school,” Stephens said.

LaGrange head baseball coach Donnie Branch has placed a lot of faith in the young freshman and so far this season it has paid off. Stephens appreciates what Branch has done for him so early into his high school career.

“Coach Branch has helped me with the mental part of the game,” Stephens said. “Honestly, he’s helped me a lot.”

Branch is not the only member of the team that has helped him out. Seniors Turner Cook and Zack Thompson have taken Stephens under their wing.

“Turner also plays first base with me so during practice we’ll have conversations about what each other’s doing wrong and fix it,” Stephens said. “Zack is our leader. He’s just always helping you improve and always making sure we stay not too high and not too low.”

Stephens is enjoying his first year at LaGrange High School and already loves being a part of blue crew — the student section at LHS.

“Being a Granger means everybody is with you every step you take and the bonds you build,” Stephens said. “On the field, we are a little community.”

Give Stephens a pack of Reese’s cups, a bottle of water and some Lil Baby through his headphones before the game, and he is ready to go to work at the plate.

Stephens loves the walk-up song tradition at LaGrange High School and chose “On My Side” by R5 as the song that accompanies him to the plate.

Stephens was named to the all-tournament team at the LaGrange Toyota Invitational. He has gotten off to a hot start to his first season in Granger blue and is on a quest to be named to the all-region team.