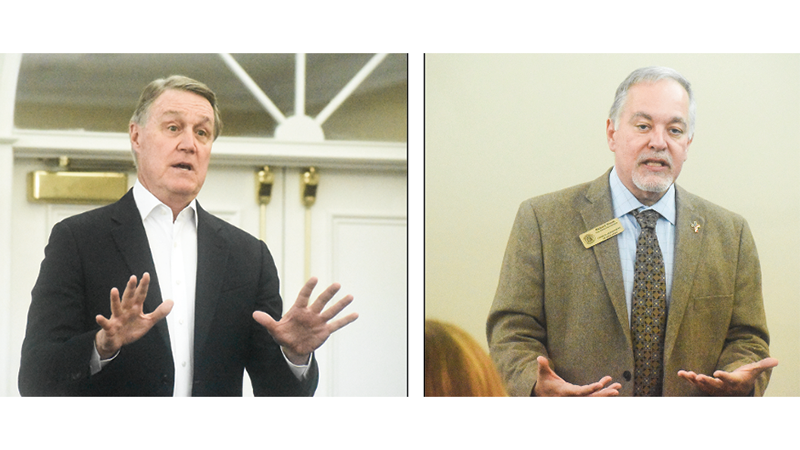 Perdue, who is seeking the Georgia Governor role from fellow Republican incumbent Brian Kemp, spoke of many goals during his visit, but his main two objectives should he be elected are “to put a Republican conservative back in the White House in 2024” and “to stop the madness in Washington,” he said.

“I want to get the Senate majority back this year, and there’s a good chance we’ll get it back and stop this madness up there,” he said.

“That’s why my senate race in 2020 was so important. [I wanted to] keep the majority to stop this nonsense from happening … and maybe from stopping what’s going on in Ukraine right now today.”

His current campaign, he noted, is being backed by former U.S. President Donald Trump. Perdue said one of his key components with running for governor included securing safe and secure elections, voicing his belief that the 2020 election where Trump lost the presidency had been falsified.

He supported the lawsuit by Trump seeking to overturn the election results.

He additionally pointed blame at Kemp’s leadership, voicing that he felt the current governor had caused a divide between state Republicans and the Republican party.

“We are divided, and it’s not my fault. We were divided before I got in here,” he said. “This is not a blue state, ya’ll. What I’m seeing now is that we’re losing our competitive edge and if we don’t get this figured out pretty soon, [other states] are out-competing us in many ways.”

Perdue also spoke against Stacy Abrams, who he noted as “radical.”

Perdue further spoke on his plan to completely eliminate the state income tax as a measure to help Georgia heal from recent inflation and oil spikes that have financially- bound Georgians.

“At the national level, you put pressure on governments to release the oil reserves right now [and] open the pipeline. Locally, you use the power of the budget. You have to start looking at how you’re using the state money and do a real hard expense review.”

In terms of education, Perdue plans to introduce a Parents Bill of Rights, essentially allowing parents to have a say of what is taught in schools.

“If we don’t get control of what we’re teaching our kids in K-12, we’re going to lose them all,” he said.

“It has been a challenging time, but it has been a resourceful time for us as we come out,” he said. “Our priority now is trying to catch our kids up that perhaps have suffered some learning loss. I believe we will see that in the very near future.”

Woods said that Georgia was experiencing its highest graduation rate in history at about 80 to 84%.

Woods said he’s pushing for more trade schools and technical colleges to be established in the state in lieu of traditional four-year colleges.

Woods additionally nodded to Perdue’s Parent Bill of Rights idea by noting that “inappropriate” materials should not be taught in classrooms.

While he’s advocated for more history classes and even pocket constitutions to be readily available in schools, he’s also taken steps to prevent the teaching of concepts like Critical Race Theory.

“I’m the first elected official to come out against Critical Race Theory in the state of Georgia,” Woods said. “I made sure we looked at our standards and were sure it was not present. [I made sure] it was absent from our training in Georgia, and if there were any money that came into our state [and Critical Race Theory] was a qualifier, we wouldn’t accept it.”

Woods also spoke on his support in the Transgender Sports Bill, or Senate Bill 435, which would prohibit transgender youth from competing in student athletics.

“I used to be a coach and I’ve coached [boys and girls], and I’ve been very open with that,” he said. “You do not need to have biological males competing against girls.”

Early voting will begin May 6 with the primary election taking place May 24.