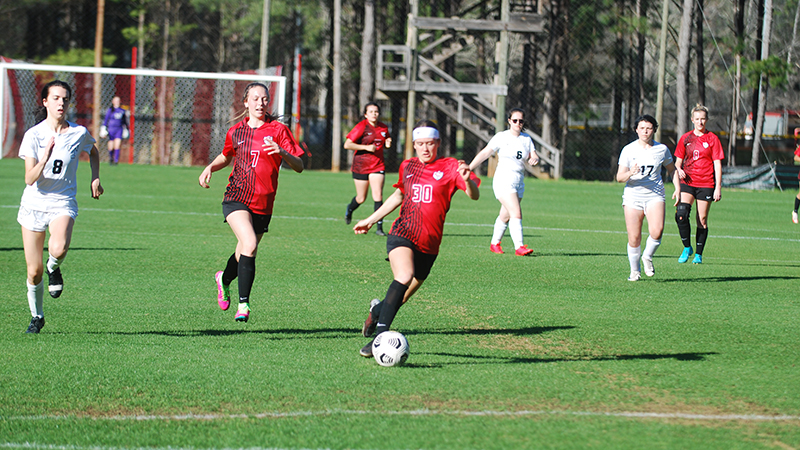 Keeley McGuffin and Kate McAteer duked it out for woman of the match as they combined to score all 11 goals. It was McGuffin walking away with the honors after setting a school record for six goals in the match and provided two assists as well.

“Our finishing was really good tonight,” Cavaliers head coach Mike Petite said. “They play a real deep line and our forwards and midfielders got after them.”

Not to be outdone, McAteer scored five goals of her own.

The two goal scorers would not have had that many chances if it was not for the hard-working midfield that won balls back and played the forward players into space.

“Mary Kate Baswell, Kaylie Flores, and Kadence Leithleiter play our central positions,” Petite said. “They dictate the pace of the play. Our forwards scored 11 goals, but that doesn’t happen without [Baswell, Flores, Leithleiter] making the connection from the back to the front.”

Raine Hunt did not have much to do tonight as the starting goalkeeper; backup keeper Emily Lindsey came into the game and got both hands on a penalty kick but was unable to keep it out of the back of the net.

The game was domination from beginning to end, but Petite saw the need for the team to be more consistent throughout the game.

“We can still play faster,” Petite said. “We need to be hard, fast and physical. We were hard at times, we were physical at times, but we weren’t all the time.”

Callaway locked up a home playoff game in the first round with the victory. The Cavaliers will finished second in the region behind powerhouse Bremen with a region record of 3-2. Callaway improved to 12-2 overall. The Cavaliers next game will be at Beaugard on March 22.