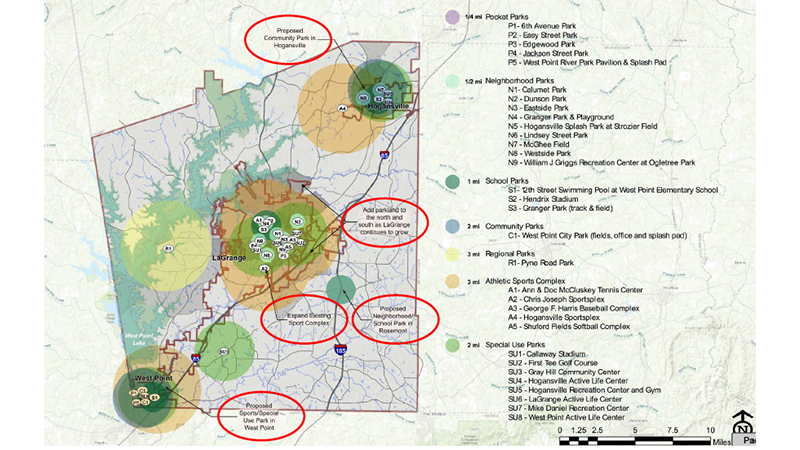 Following a year of planning and surveying the public, Barge Design Solutions, a Columbus-based firm, presented its master plan for Troup County’s Parks and Recreation facilities to the Troup County Board of Commissioners Tuesday morning.

Steve Provost with Barge noted that the Troup County Parks and Recreation Department would need over 91 additional acres of land in the near future and at least 113 acres by 2034 to accommodate for the county’s expected growth and the types of activities the population desires.

“[The] department’s mission is to have quality and affordable recreation for all participants across the county,” Provost said. “This is being done under the backdrop of a constantly changing population. The population during the plan period is likely to increase by nearly 11%, and that’s likely to include an increase in the 55-years or older population of over 6%. Meanwhile, your 0-17 age range is likely to decline as much as 4%.”

This indication came from community-wide, public input sessions held during the last year in the form of focus groups, public meetings and online surveys.

A “surprising” find during the input sessions closing was that most of the community had a desire to include more recreational art classes, such as pottery and painting classes. Programs like more community events and fitness and wellness programs were second and third requests. Other requested programs included programs for those with special needs, more nature trails, swimming-related programs and community garden programs.

“The community is really into non-traditional recreation activities in addition to sports and sports complexes,” Provost said.

Since the initial research was conducted, the county has since purchased nearly 100-acres of land at the former Whitesville Road School and the property off of Pegasus Parkway where the new Agricultural Center sits. County Manager Eric Mosley noted these investments potentially meet the wilderness aspects that community members are interested in. The county is also in the process of managing a pond at the Agricultural Center, adding some fishing opportunities as well, Mosley said.

During the research for the master plan, Barge visited Troup County’s 32 facilities to rank them based on their condition. Of those 32 facilities, eight of them were ranked “poor,” Provost said.

“[The poor ranked facilities] all had something in common, they’re all your small to medium-sized parks, your neighborhood parks,” Provost noted. “But the county does extremely well taking care of its sports complexes and its Active Life centers, and many of those ranked ‘excellent’.”

Initial recommendations by Barge were broken down for each of the county’s three cities.

Hogansville area recommendations include addressing the community’s desire for dog parks, an event center, walking and biking trails (multi-use paved) and providing more family-friendly programming. Barge additionally suggested the construction of a community park in the northern section of Hogansville.

LaGrange area recommendations included building more walking and biking facilities and adding restroom buildings, pavilion/picnic sites and kayaking/canoe access points. Barge additionally suggested the construction of a community park in the northern and southern portions of LaGrange due to population growth and the expansion of the existing sports complex.

To tie the county and three cities together, Barge suggested a series of trails to further connect the parks within the cities and out to West Point lake.

Barge recommended leaving the effort on the cities to focus on smaller parks and trail connections and the county would focus on its sports complexes and Active Life facilities.

“The large-scale parks here are very well managed for a parks department that, compared to other similarly-sized departments, is using less money to maintain that is normally recommended per record,” Provost said.

“As the park system expands, what’s critical is the funding of the maintenance and the staff to take care of those parks. While Troup County has high-quality parks, it is underfunding its maintenance compared to other communities.”