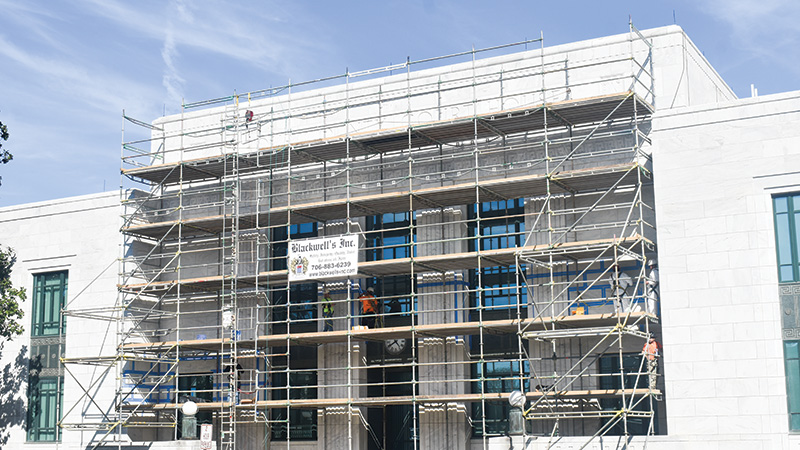 The Troup County Board of Commissioners approved a $32,000 work order Tuesday to further benefit the renovations on the Juvenile Court Building at 118 Ridley Ave.

During its Jan. 4 meeting, the board approved $78,000 to be used on the juvenile court for a series of exterior renovations caused by years of water damage.

The extent of the project involves reconstituting the mortar joints that will mitigate water penetration and moisture issues.

“I was really surprised when they got the scalpel up, and I was able to go out there … some of those [joints] you could pull right out,”  said Troup County Community Development Director Jay Anderson. “It was really bad.”

With this work, Blackwell Inc., the contractor for the project, requested a $32,000 change order to not only finish the joint reconstruction work but also seal the entirety of the building with a Siloxarane waterproofing repellant sealer. The sealer is made to expand and contract according to the weather, Anderson said.

The building, built between 1939 and 1940, is made from granite, which is quite porous, Anderson explained. The sealer would not only protect the joints but prevent water from entering into the masonry.

Anderson believes the additional sealing will ensure that the building will last at least another 20 years.

“[Mr. Blackwell’s] quote was we’ll all be gone before it has to be done again,” Anderson said.

Previous joint restoration was completed on the building roughly 10 years ago, Anderson said, but the work was only for the more impaired portions of the building.

The funds for the project will come from the county’s capital fund.