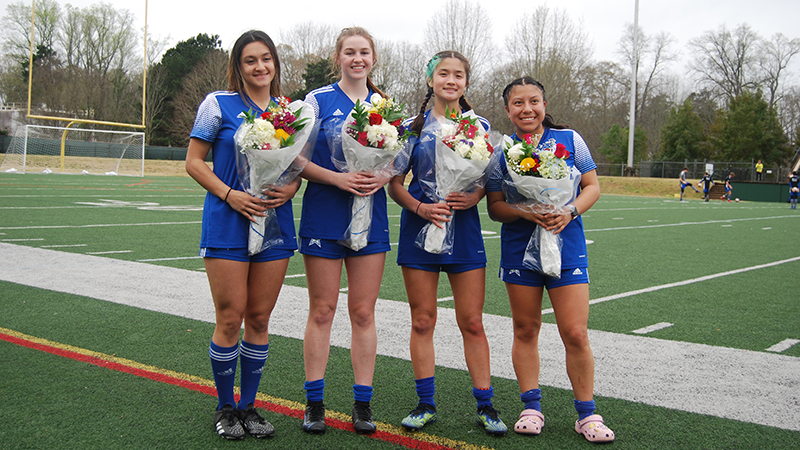 The LaGrange girls soccer team earned a 10-0 win over Jordan on Friday, but this night was special for other reasons. It was senior night and the Grangers’ four seniors, Mariana Ceja, Morgan White, Olivia Sato and Delfina Martinez were treated like queens.

“They are a really connected group, they’ve been playing together a long time,” Grangers head coach Jon Callahan said. “They are the fire behind us that helped us get a lot of the stuff done that we have.”

Ceja is the team’s backup goalkeeper but is so much more important to the team than just being a backup.

“She is such a warrior, she works so hard in a really thankless role,” Callahan said. “She’s come up big for us in the moments we need her.”

For Ceja being a part of the Granger soccer team is family.

“It means to be a part of a big family and know that they will always have each other’s back,” Ceja said.

Her favorite memory with the soccer team: having a giant sleepover and playing games with her soccer sisters.

“Morgan White and Olivia Sato have the most incredible chemistry, and they’re such great friends,” Callahan said. “They keep us so organized at the back.”

“[Being a Granger] means that you always have a great support system and have people there for you when you need them,” White said.

White’s favorite memory as a Granger: The bus ride back from state last year where she got to sing songs with her teammates.

“I think being a Granger means challenging yourself to be better every single day,” Sato said.

Her favorite memory with her team: Senior night from last season when the energy in the stadium was unmatched.

“Delfina is a great player, especially for playing out of position at left back,” Callahan said. “She has never missed a step.”

“I think being a Granger is being a family and always being there for everyone and always supporting each other,” Martinez said.

Her favorite soccer memory: Scoring her first goal against East Coweta, which turned out to be the game winning goal.

On a night when the Grangers put 10 goals past their opponents, it was even more special to do it with these four ladies.

Tyra Potts, Adry Matias, Sam Cottle, Carlee Rolland and the senior White all got a goal on the evening.

Roland had two assists with Cottle notching one as well.

The Grangers are 7-9 on the season and 5-0 in region play. LaGrange’s next match is an away game against Kendrick on March 21.