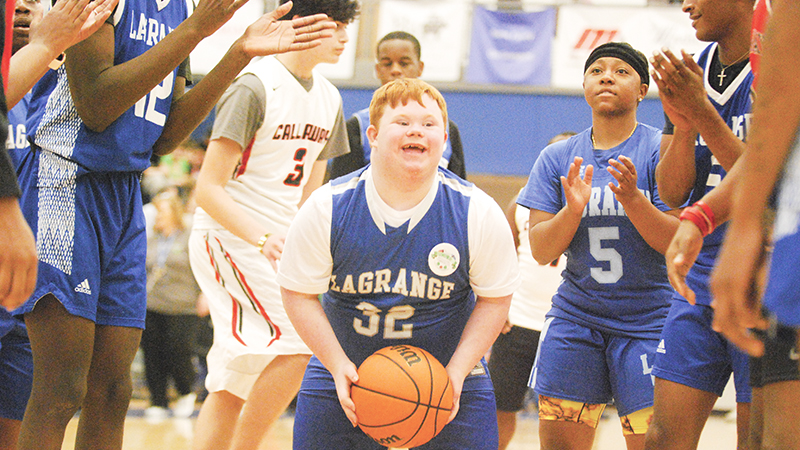 An Exceptional education student sets up a shot as he’s surrounded by his teammates.

The third annual Special Night-Building Community returned Thursday night, and as always, it drew a big crowd to support the boys and girls taking the court.

Members of opposite sides of the county and two different schools — Callaway and LaGrange High Schools — gathered in the LaGrange gymnasium to celebrate the exceptional education students from both schools. The night was filled with hope, laughter, and even a few tears.

After a two-year hiatus due to COVID-19, the event was back in full force this year.

Mitzi Norton from LaGrange High School started this event four years ago and is happy to see it return.

“The pandemic has brought about so much pain and loss for so many,” Norton said. “I believe our community, as a whole, is seeking joy like never before.”

Norton knows this night is special but hopes to bring inclusion to the forefront and not just for one night.

“I believe Special Night is inclusion at its best,” Norton said. “Inclusion is evolving within our community and in our schools; however, we still have a long way to go. It takes effort, action, and awareness to build inclusion within the school, employment opportunities, and post-secondary opportunities presented within our community as a whole. Inclusion benefits individuals with and without disabilities.”

Parents were ecstatic to finally see their children get the recognition they deserve.

“It’s wonderful, I love how this comes together,” Alaina Dardy said.

For Dardy and her son, Devin, this was their first time being a part of the event. Devin suited up in a blue jersey and took the court as a player.

This event is all about coming together; from the student section to the parents to the staff, it was all about unifying for one night to cheer on these ladies and gentlemen. For one night, the exceptional education students were treated like absolute royalty.

It started with the opening run through the tunnel and out onto the court to the spectators cheering on every basket like it was a game-winning field goal in a state championship game. Some of the exceptional education students took the court as players, others were cheerleaders and even one student joined the band as a drummer for the night.

“It’s a great time for Darby to feel like she’s just like everybody else, although she’s not because we all think she’s special,” Laney Reese said. “Clearly, she has more self-confidence than me because she’s going out to sing the national anthem. She gets to be independent in all this.”

Darby Reese took the microphone and belted out the national anthem to thunderous applause from all those in attendance. It was a song everybody in the gym had heard a million times, but this rendition will stick with them for longer than many of the others. After she finished the national anthem, Darby took her place among the cheerleaders as she was on double duty for the night.

Some exceptional education students did not participate in the game but came out to support their friends and colleagues.

What encapsulated the joyous atmosphere the most was the fact that the biggest smiles were not from the exceptional education students or the parents, they were from members of the Callaway and LaGrange boys and girls basketball teams who helped facilitate the game. They smiled and cheered their temporary teammates on like it was the biggest game of their lives.

“I’m sure the basketball players who came to support for the very first time weren’t quite sure what to expect, but I can promise you that less than a few minutes into the evening, everyone was smiling, and I don’t mean any smile. Their eyes were wide open and they all looked elated,” Norton said.

There was no shortage of volunteers as students from both schools desired to be a part of the night’s event. Even members of the Callaway girls soccer team rushed over after their game concluded, so they could cheer on their fellow students.

“The event is growing and expanding with each new year. People want to see what all of the hype is about, but they don’t recognize what a powerful experience they are about to embark upon. I have been approached by multiple individuals who share that once they have experienced Special Night, they will never miss it again. It is truly life-changing,” Norton said.

Some parents found the night to be so special they hope it spreads like a wildfire to other school systems.

As the world around them shifts and changes, the exceptional education students have a safe haven at LaGrange and Callaway. Yes, this is just a single night, but the awareness and joy this brings to these students can last a lifetime. While it’s only one night a year right now, Norton has big plans for these students.

“Great things are to come and plans are already in the making,” Norton said. “You don’t want to miss it!”