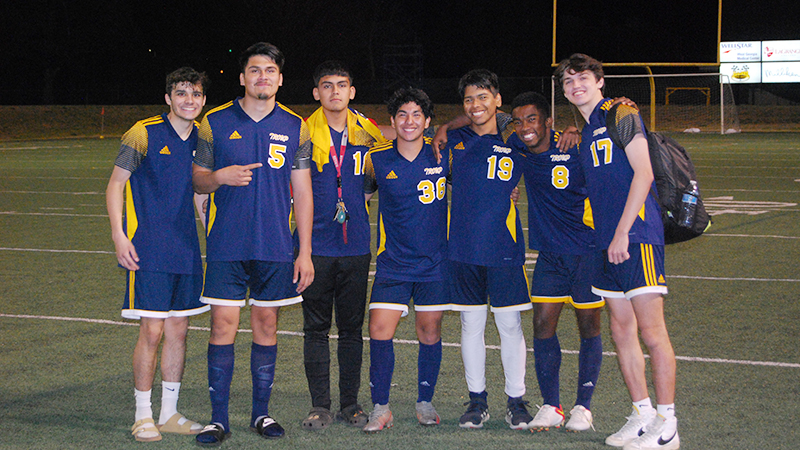 Each of the eight seniors spoke about what it means to be a part of the Tiger family and this soccer team.

“As our principal Nicki Watts, she’s an amazing principal, says, ‘it’s beast mode,’” Ketchum said. “These are the best guys I know.”

“It means everything,” Johnson said, “This is my first year, I love these guys ,and I’m having a lot of fun.”

“Showing your pride every day, every time, every game,” Lopez said.

“It’s amazing to be able to share all these amazing memories with my teammates,” Meadows said.

“I love waking up and going to one of the best schools in Georgia,” Rivera said. “Win or lose, it feels good to have the same pride every day.”

“We’re trying to put Troup on the map,” Orantes said. “I love playing with these guys and I wouldn’t trade it for the world.”

This team has grown leaps and bounds over the last few years and these seven seniors have helped spearhead that improvement. Two years ago the program only had one senior.

“They went through the lean years and stayed with us and believed us when we said it would get better,” Lawson said.

Better it got as this is the first year Troup County reached double-digit wins in its history.

“People don’t just schedule us anymore because we can come in there and beat you, and that’s a testament to these guys,” Lawson said.

Some of the players even shared their favorite soccer memories. One of Ketchum’s favorite memories was made on the night when he put the ball in the back of the net and got on the score sheet with a goal. Meadows remembers the goal against Valley and Merida matched that memory with his bicycle-kick goal against Valley as well. Riviera’s favorite memory was meeting his fellow seniors back when they were just freshmen.

The Tigers improve to 10-3 on the season and 5-2 in region play. Troup County is in the home stretch of the season with only two games remaining. The Tigers next game is at home versus Kendrick on Wednesday.