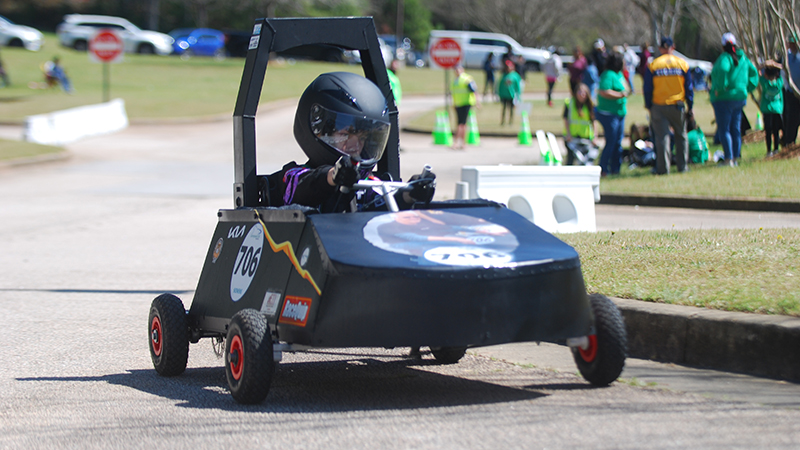 Seven teams of the 13 teams participating were from five of the local elementary schools (Long Cane, Rosemont, Ethel Kight, Franklin Forest, Callaway). Rosemont had three teams in the event with enough students to make an all-girls team.

“I told them when they get to the middle school next year that ‘I know a guy.,” Graham joked.

The Greenpower racing program only started being introduced to local elementary schools in October 2019 with Rosemont being the first. Callaway started its program during the current school year, and Berta Weathersbee is working on building a car right now.

The elementary school events consist of a drag race portion, a slalom portion, a circuit race, and a presentation.

For Saturday’s event, teams came from as far as Gulf Shores, Alabama and Chattanooga, Tennessee to participate in the rally.

“We couldn’t be more excited to be attracting teams from that far away,” Graham said. “It highlights how important it is to put on a great event.”

When people hear racing they mainly think of sports, but Greenpower is so much more than that. It is a STEM program that is helping young people take knowledge learned in the classroom and applying it to real-world scenarios.

“The skills they’re learning now, if we can build on them in middle school and roll those into our high school programs, the knowledge they have will help them down the road,” Graham said. “The teamwork, problem solving and public speaking they encounter in the Greenpower program will have them so much better prepared for whatever career they go into.”

Because the program has now expanded into local elementary schools and the high schools these students will be able to build on these skills for a decade if they stick with the Greenpower program.

The next step for Greenpower is to roll out the program to all the schools in Troup County.

“I think we only have three schools left where we’re trying to roll out programs, and we’re hoping to do that next year,” Graham said.

Graham believes that next year he will have over 20 teams participating in these events as the Greenpower programs spread like wildfire through the local, state and national school systems. He hopes to host this event at other elementary schools in the future so that the course can change and not be limited to the same course at Long Cane Elementary every year.

“It gives them even more project management experience, and I think it helps them to see the bigger picture of how the GreenpowerUSA program can positively impact their future,” Graham  said.