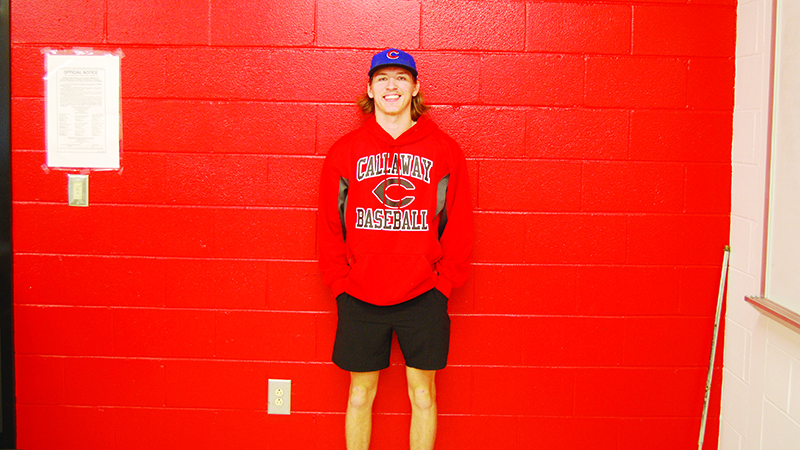 Fresh off a walk-off bunt against Temple, Tucker Starling was named The LaGrange Daily News’ Athlete of the Week.

“I think that was probably my first walk-off that I’ve ever had,” Starling said.

Starling has been playing baseball since he was about five years old. He has switched positions many times over the years and plays pitcher and second base for the Cavaliers but feels his most natural position is at second base.

“It doesn’t bother me [to change positions],” he said. “When I first started playing, I was a lot bigger and I played first base. I’ve moved positions for as long as I can remember, so it’s really nothing new to me.”

This versatility will certainly suit him at the next level as he is committed to attend Central Alabama Community College where he plans to major in nursing.

Before he finished out his senior year, he has his eyes on some unachieved goals at Callaway first.

As a senior leader on the team, Starling has helped the younger kids and hopes to help lead the team to bring home some banners.

“The young guys are a step further than I was at their age,” he said. “When we get down early, we always have a few of us pick the team up. That’s a leadership role I kind of picked up this senior year.”

Starling’s ability at the plate has grown tremendously over the last year, so much so that that picture-perfect bunt he laid down might not have been possible in years’ past.

“I’ve gotten a lot better offensively,” he said. “Whenever I first started out, I wasn’t a good hitter, and I definitely couldn’t bunt.”

Despite his improvements at the plate, Starling still sees room for improvement with the bat.

The coaches at Callaway have helped him grow his game since he’s been there, but he credits coach Jon Hopper for really helping his ability to pitch.

“He came in my sophomore year and he does pitchers only,” Starling said. “He’s definitely helped build me as a pitcher and helped get me seen a lot as well.”

“Being a Cavalier means perseverance and overcoming obstacles,” he said.

Starling loves having walk-up songs and chose “Me or Sum” by Nardo Wick and Future. This is not the only tradition Starling loves at Callaway, he enjoys going to the Cavalier football games every Friday during the fall.

When he’s not on the baseball diamond, Starling loves to hit the golf course. He tries to make it out every weekend to get a round in, but the weather lately has not made that possible.

Starling models his game and the way he treats baseball on Braves legend Freddie Freeman.

“His desire to be there for his team every single game is very important,” Starling said. “He tries to play 162 games a year while other players need a break.”

Starling’s time at Callaway is nearing its inevitable conclusion, but he is staying laser focused on making his final season as a Cavalier special.

“Right now, I’m just staying in the moment,” he said. “At some point, it’s going to come and if I just focus on what’s going on right now, whenever it’s all done I’ll be able to say I’m a state champion, and it won’t hurt as bad.”